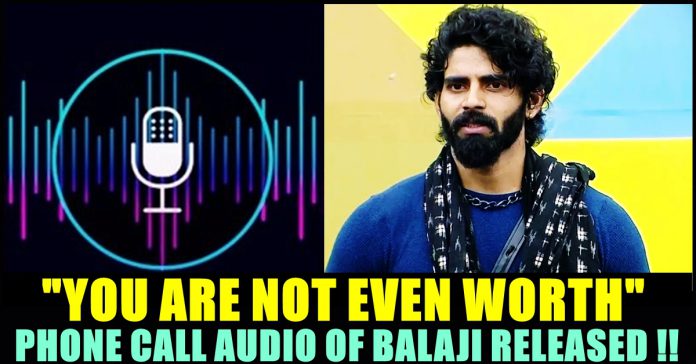 Joe Michael released the phone call audio of of himself and Balaji Murugadoss in his twitter handle and said that he will be releasing the full audio in youtube soon. In the audio we could hear Joe Michael asking him to provide the proof he mentioned inside the Bigg Boss house and the runner up of the Kamal Haasan hosted show says that he will face the issue legally. The audio is going viral in the micro blogging social media site with fans reacting in various ways.

Earlier, Joe Michael who owns the company, issued a legal notice demanding an unconditional apology or to pay compensation of rupees one crore. He also shared the screenshot of sending legal notice to Balaji in Whatsapp. Now, he came up with a phone call audio conversation of himself and Balaji.

“In Bigg boss house, You said that you have friends and you can prove it with a proof. Now, I want you to provide the proof you mentioned in social media.” says Joe Michael and Balaji replies to him saying “I have already told you that I will face it legally”

Further Balaji says “You are not even worth to get my attention in social media ok.” to which Joe questions why he attended his event without invitation. “They pleaded me to attend the event, that’s why I came” Balaji replies. When Joe Michael asks him to reveal who pleaded him, Balaji says that he is ready to face it legally.

Full Audio Converstation Will be Uploaded in the You tube Soon 😉

Balaji Murugadoss is super active in Instagram since coming out of the Bigg Boss house. He has been sharing the videos of children uttering his name when they are asked to tell their favourite contestant in Bigg Boss season four. After thanking his fans for having his back while he was staying inside the Bigg Boss house, Balaji also conducted a live for his fans in Instagram.

Season 4 of Bigg Boss show ended with Aari Arjunan winning the title and prize money of Rs. 50,00,000. Balaji became the runner up and Rio grabbed the second runner up spot. Kamal Haasan, before announcing the title said that the winner received 16 crore votes from the audience and runner up got 6 crore votes. Balaji Murugadoss has been thanking to people who voted for him and said that every vote he received is a trophy to him.

Previous article“DMK Is A Corporate Company” – Chief Minister Edappadi K Pazhaniswamy !!
Next articleJUST IN : Director Desingh Periyasamy Is Going To Marry This Actress !!

Here Is Everything You Need To Know About The OMR Drunk & Drive Case!

In Thiruvanmiyur’s PTK Nagar, neighbours ask in hushed, somber tones whether Govindamma has eaten since her husband Munnusamy’s death. Govindamma sits outside their dimly...