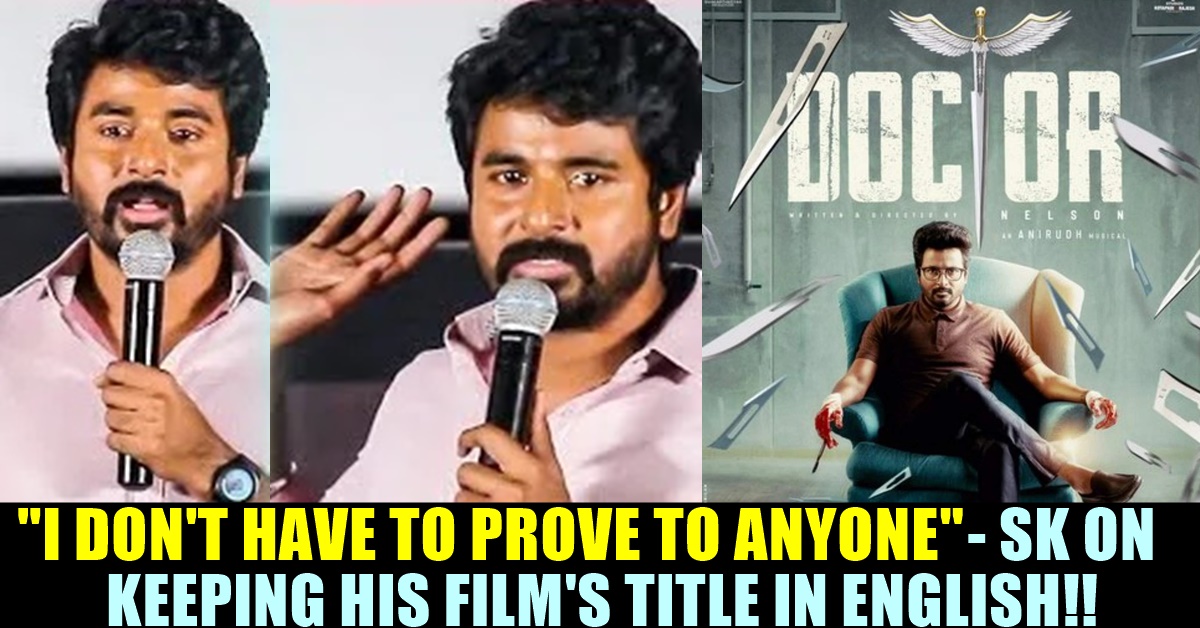 Sivakarthikeyan was subjected to a question on his movie title being in English. The actor has handled the question so well and has given a striking answer to the reporter politely.

Actor Sivakarthikeyan has a huge fan base and many people marveled at his spectacular journey. After entering the cinema, Sivakarthikeyan started evolving as a singer, lyricist, producer while creating a place for himself as an actor. People also look forward to his projects.

With the release of splendid songs, his upcoming movie Doctor has created a huge expectation among the people. In a recent press meet, Sivakarthikeyan was asked a question regarding the same movie. Actors Sivakarthikeyan, Priyanka Mohan, Vinay Rai, Yogi Babu have acted in the movie. Nelson Dilipkumar has directed the movie and Anirudh has composed the songs. The movie is bankrolled by Sivakarthikeyan’s and KJR production houses. On October 9th, 2021, the movie is set to hit the theatres.

A reporter asked Sivakarthikeyan about naming the movie in English. The reporter has asked, “Everyone is suggesting to name the movie title in Tamil. We even hear on stages people telling us to celebrate you as you are a Tamil guy. But why have named the movie in English as Doctor and not in Tamil as Maruthuvar?”

Sivakarthikeyan has answered this question without any hesitations. He has said, “To make the movie to have a reach, a word which is apt and is in regular usage is kept. I know I am Tamilian and people who are close to me also know that I am a Tamilian. It is not a necessity to determine who I am through the title of my movie. It is just a movie and it ends there. Naming a movie in Tamil is good but an accurate title should be found because they will be having various details related to the title. Even I initially suggested keeping a Tamil name. But these days after the advent of OTT, using English titles help in reaching the audience of various languages. There is no need to change anything.”

Director Naveen Called Out Tambras Leader Narayanan After Watching This Video Of Him !!
Venkat Prabhu Gets Emotional After Seeing Kalidas Receiving An Award For Playing “Sathar” !!