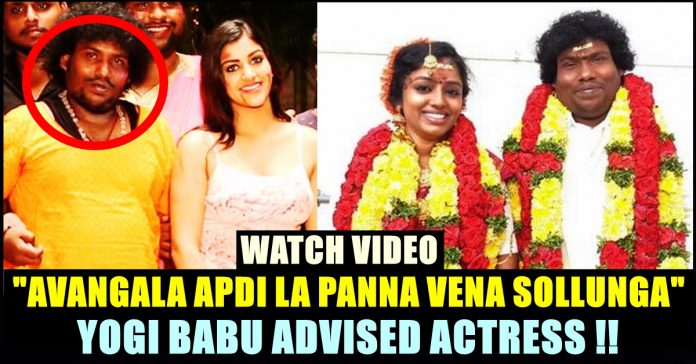 Yogi Babu is one of the most trending comedian in Kollywood cinema right now. Having a handful of films to be released, the actor rose to fame through films like Kaaka Muttai, Aandavan Kattalai, Pariyerum Perumal etc. He got married recently and is leading a happy life with best line ups ahead. Now the actor has reacted to a controversy regarding a supporting actress doing videos with his image in Tik Tok platforms.

The actor who started doing movies as solo hero, gained an ardent female fan who is also a supporting actress. Named as Suji Pradeepa, she claims herself as hardcore fan of Yogi Babu and started doing romantic videos with his morphed image in her tik tok account. Her videos which went viral grabbed the attention of Yogi Babu through Polimer news channel. The actor who responded to it through phone call, asked her to stop her activities as it would create problems in her personal life.

“There might be people behind her to instigate to do such things. We can’t keep tracing her without doing job. If she doing it out of affection and love, you please advise her not to do such videos. I have seen two, three videos of her. They are way too much for a fan video as she is morphing pictures of myself and my wife’s.” said Yogi Babu in his own style.

“People are wondering how I got married. At this time, I don’t know what to do on seeing these kind of videos from her. It’s just funny. I saw her saying that doesn’t matter whether I am fair or dark. I want to ask questions but I don’t know her husband” said Yogi Babu.

Followed by his reaction, the supporting actress released a video apologizing for her activities. “If he got hurt by my videos, I want to ask sorry to him. I am extremely sorry sir.” she said in her video.

Yogi Babu married Manju Bhargavi on 5 February 2020 in an intimate ceremony held at their ancestral temple in Tiruttani. He made his feature film debut in the Ameer-starring Yogi as an aspiring actor and subsequently adapted the name of the film as a prefix for his stage name. He later appeared in an uncredited role as a pimp in Sundar C.’s Kalakalappu. In 2013, he appeared in his first extended comedy role with Pattathu Yaanai, while he also featured in the Hindi film, Chennai Express alongside Shah Rukh Khan.

Similar to comedy actors Santhanam, Manohar, Swaminadhan, Yogi babu also hailed to Tamil cinema from comedy spoof show Lollu Sabha in which he worked as assistant director as well. Comment your views on the way Yogi Babu handled the controversy !!

Famous movie production house Studio Green which is currently producing the most expected "Suriya 42", on Sunday, came with a most important request to...