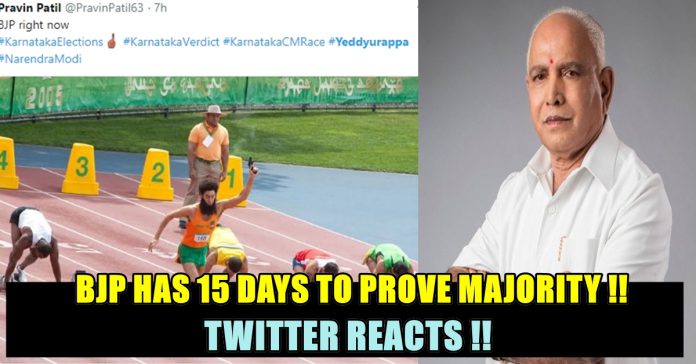 Yeddyurappa Takes Oath As Karnataka CM & Shocks Everyone In This Bizarre Karnataka Verdict !!

B S Yeddyurappa was sworn in Chief Minister of Karnataka on Thursday, a day after the Governor Valubhai Vala invited the BJP to form government in the state. B S Yeddyurappa, who was elected the party’s legislative leader earlier that day, took oath at 9 am this morning. The party, which emerged as the single largest party in the Assembly, secured 104 seats in the 224-member House, just short of majority. It has to prove its strength on the floor of the House within 15 days. The Congress, which won 78 seats in the elections, has allied with the JD(S), which has 37 seats, in a bid to keep the BJP out of power. The alliance, which has 115 MLAs in its kitty, had met the Governor on Thursday to stake claim to form the government. Following the Governor’s move, the alliance petitioned the Supreme Court late Wednesday night. The top court, however, refused to stay BJP’s BS Yeddyurappa swearing-in but made it clear that the government formation would depend on the final verdict in the case. Who has the people’s mandate in Karnataka?

Congress which dropped to 78 seats, whose own CM and Ministers lost by big margins.
JD(S) who won only 37 seats and lost their deposits on several others.

People are wise to realise.

For everyone who is tweeting #BSYNammaCM, I have one question,

Heard it was part of one month package deal, is that true? #GanjiGiraki #Yeddyurappa #KarnatakaElections2018 pic.twitter.com/3P8uuRs7fI

CM aspirant #Yeddyurappa says people of Karnataka has voted for change, but Cong wants to stay in power through backdoor. A reporter asks if it has learnt it from the BJP after Goa, Manipur 🤣🤣🤣🤣🤣
Whoever that reporter is, take a bow 🙇‍♂️🙇‍♂️ #KarnatakaElections

Many congrats to #Yeddyurappa ji on taking oath as the Chief Minister of Karnataka. A new era of development begins in #Karnataka@BJP4India @BJP4Karnataka @BSYBJP

Why these double standards?
Goa, Meghalaya and Manipur had different rules
Complete violation of the SC order making way for horse trading
According to this letter
No specific date/time is mentioned to take oath by #yeddyurappa
15 days to prove after that

However, the Karnataka governor’s decision seems to be based on the assumption that Yeddyurappa has the best chance of forming a stable government. This assumption does not hold because another formation has already shown majority by providing the letter of support of all its legislators. While Article 361 provides governors absolute immunity from judicial interference, the courts have in the past indicated that a decision by the governor should not be arbitrary and patently malicious. Given the circumstances where JD(S) leader HD Kumaraswamy has already accused teh BJP of trying to poach his MLAs with monetary and other inducements, it is a fit case to approach the highest court of the land to answer an important constitutional question: Is it time to place guidelines on how a governor should exercise his discretionary powers? Vala is a former member of the BJP. Having disregarded the claim of a coalition with requisite numbers, he has gone ahead and invited a party in minority. This reeks of partisan functioning and is a classic case of denial of natural justice.

However, there is currently no precedent establishing how a governor should function when he decides to invite a person to take oath as chief minister. While some invoke the Goa case of 2017, where the governor invited the BJP despite Congress being the single largest party, to argue that the same principle should be applied here, the fact is that in Karnataka, the claim of the Congress and the JD(S) is on an even higher pedestal. Unlike Goa, the Congress and JD(S) here have shown that they have the majority support while staking their claim. It is true that the courts have so far maintained the absolute nature of Article 361, but this is the time for the judiciary to rethink its stand on this constitutional provision and question the intent of the governor.

Previous article“Wanted” Posters Of S.Ve Shekar Seen Across Chennai !! : Check Reason !!
Next articleShah Rukh Khan Wants His Team Players To Concentrate On Cricket Rather Than Acting !!

If you are aware of Bigg Boss show's third season in Tamil, you must have known about Meera Mithun , one of the most...