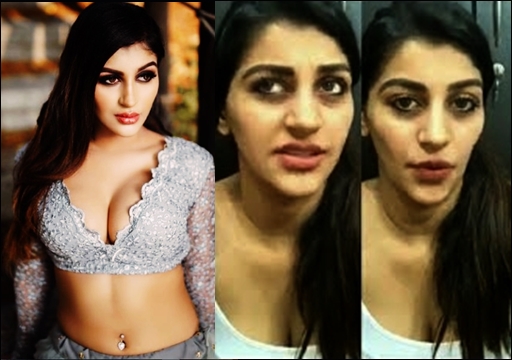 Young and emerging actress Yashika Anand who is known for her bold replies to her toxic Instagram followers, recently made an online user who questioned her for “showing body” to shut once and for all with a savage reply. The actress, while answering, sarcastically said that she will show her hair in the video as her face is also a part of her body. She also answered to some other followers of her who asked about her ex relationships and her former boyfriend niroop. Yashika also opened on why she couldn’t take part in the “Bigg Boss Ultimate” despite of getting an invite.

Actress Yashika Anand who rose to fame among youngsters by participating in the second season of Kamal Haasan hosting reality game show Bigg Boss, conducted a question and answer session with her Instagram followers on Monday. She who is currently enjoying 2.8 million followers in the photo/video posting social media application, answered to a number of users who questioned about her professional and personal life.

However, she also happened to face some inappropriate questions from few miscreants and instead of turning a blind eye to their questions, the 22 year old decided to give them back right away.

Among the many, a follower asked Yashika whether she doesn’t have “shame” as she is uploading pictures of herself “exposing her body”. Answering to him, Yashika said “I will show my hair and speak because I am not able to show you my face as it is also a part of my body. Shameful, Shame, Puppy shame, Oh my god” the actress said.

To another follower who asked the actress to tell about her “Ex”, Yashika asked back ” Which one?”. Talking about why she couldn’t take part in the ongoing Bigg Boss ultimate, Yashika said that she can’t do the tasks like before due to the recent tragic car accident she went through recently and confirmed that she received the invite.

About Niroop, Yashika said that she dared Niroop for four long years before breaking up and added that she is happy for him right now as he is living his dream currently. The actress also updated the projects that she is going to be a part of while answering to her followers in the chat session.

“Just Leave The Kids” -Suriya To Photographers Who Tried To Capture Pictures Of His Kids !!

A video of actor Suriya requesting media not to click pictures of his kids is going viral in social media platforms. The actor, after...