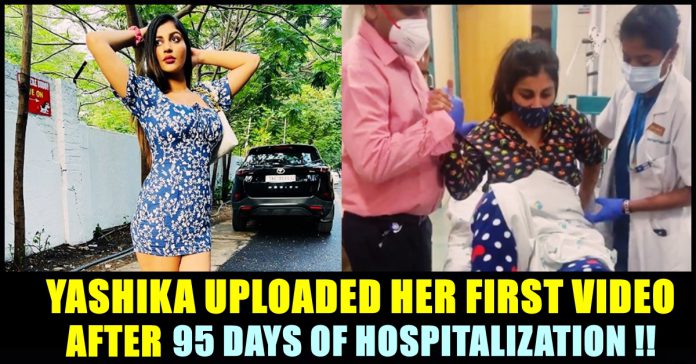 Yashika Uploaded Her First Video After 95 Days Of Hospitalization !! WATCH

Actress Yashika who became active in Instagram recently after going through a tragic trauma, uploaded a video of herself recovering after 95 days of hospitalization. She thanked the doctors who treated her all these days and hoped to get back on her feet without any kind of support. Bigg Boss fame Aishwarya, Sanam shetty and many others dropped comments wishing the young actress for a speedy recovery. Toxic comments spewing hatred at Yashika were also surfaced but the actress concentrated only on the positive comments.

The former Bigg Boss contestant is currently getting treatment after meeting with an accident that took place in the midnight at East Coast Road near Mahabalipuram. The actress’s friend named Valli Chetti Pavani who travelled with her died on the spot. The car, reportedly swerved from its path and struck the median strip and the images of the damaged vehicle were doing rounds in social media platforms.

The video showed the actress getting up with the help of doctors and nurses and trying to walk with the help of an external support. She who could be seen limping while using the support, says that she hopes to walk on her own soon. “Baby steps 🐾 ! 95 days of hope , prayers and strong will !! Hope to get back stronger on my feet without any support. Thank you doctors ♥️ for taking care of me so well” caption of her post read.

Yashika’s Bigg Boss housemate Aishwarya Dutta, sanam Shetty, TV actress Nisha and many others wished the actress to recover soon and received reply from the “Iruttu Arayil Murattu Kuththu” actress. Here’s the screen shot of the comments and Yashika’s reply :

Previous articleA Set Of Online Users Got Upset With These “Mangalsutra” Advertisements !!
Next articleMadhavan’s Tweet About Aryan’s Release Goes Viral !!

Ahead of the Tamil nadu assembly election, Political party leaders and members are busy campaigning for their respective parties. Alliances between different political parties...

A dermatologist by profession, Sethuraman who is best known for 2013 comedy flick "Kanna Laddu Thinna Aasaya" passed away due to a cardiac arrest...