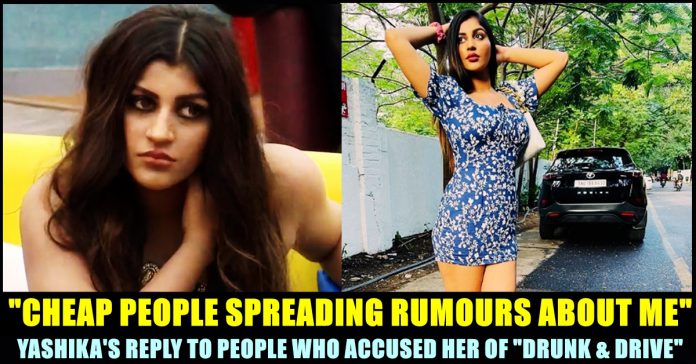 Ever since the news on Yashika’s accident at East Coast Road, Chennai took place, a set of people has been saying that the actress must have consumed alcohol while drive and caused the accident which killed her best friend Pavani. However, reports from Doctors and Police confirmed that the actress wasn’t inebriated while driving the vehicle. Still, a number of social media users are verbally attacking the actress, saying that she must have committed the accident due to excessive alcohol consumption.

Now, Yashika herself came up with a social media post slamming people who accused her of “drunk and driving”. The actress, in her post, said that she would have been in jail if she was intoxicated at the time of the accident and not in hospital. Yashika expressed her dejection over people spreading fake rumours for so long and asked them to have some humanity and grief towards her friend who lost her life.

Yashika also said that the Doctor report says the same and slammed media channels which are spreading baseless rumours for viewers and subscriptions. She mentioned that she had filed a defamation case two years ago and vented out saying that those people could go any extent for the sake of gossip.

“Law is same for everyone. For all the cheap people who have been spreading rumours about me being intoxicated while driving let me tell u the police confirmed we weren’t drunk at all . And if I was I would have been behind the bars and not in hospital ! Fake people spreading fake news has been going on from so long. But it’s a sensitive issue. Hope u show some humanity and show some grief towards her !” read the post uploaded by Yashika.

“Even the doctor reports would say the same! These fake media channels spreading fake news for sake of viewers and subscribers! Shame on u ! I’ve filled a defamation case already for ruining my name 2 years back. But these people can go any extent for sake of gossip.” she added. Here’s her post :

“Apart from all the negativity, I’m grateful for all the prayers and well wishers. Thank you for your care n love Health update: – Multiple fractures in pelvic bone and right leg fractured. I’m resting post my surgeries. I won’t be able to walk or stand for next 5 months. l’ve been bed ridden all day and I have to pass motions on the same bed. I can’t turn left or right also. I’ve been stiff for these many days. My
back is fully injured. Luckily nothing happened to my face but this is definitely a rebirth for me. Which I dint ask for. Mentally and physically I’m injured. God has punished me. But this is nothing compared to
what I’ve lost” She updated about her health in her next post.

The most awaited Oru Kutti Kadha from Master has released on youtube by actor Vijay himself. The feel good motivational song sung by the...

The toll in cyclone Gaja has touched 45, Tamil Nadu Chief Minister K Palaniswami said on Sunday and appealed to leaders of all political...