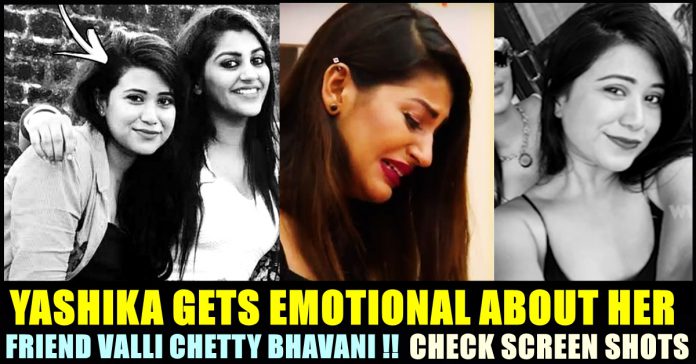 Actress Yashika who is currently hospitalized, came up with a series of posts in her official Instagram account, getting emotional about the death of her best friend Valli Chetty Bhavani. The actress who removed the display picture of her official Instagram account, Through her posts, the actress shared a post that said that she hate the feeling of missing someone and not being able to do anything about it. Another story she shared talked about how everyone in our life is having a last day with us and about how we don’t even know when it will be. The actress also shared a sketch of herself and her friend.

Recently, Yashika Anand logged into her official Instagram account after the tragic accident and reacted to some of the personal messages she received from her followers. The actress who is currently getting treatment for her injuries, came up with a series of stories expressing her emotions for the first time after the accident. As soon as the actress entered Instagram, messages from her followers seems to have flooded her inbox. Many blamed the actress for the demise of her friend Pavani’s demise.

People who were near, rescued them and rushed them to the emergency care unit at Poonjeri. Valli Chetty Bhavani was declared dead and the other three are getting treated at the hospital. Reports suggests that Bhavani was sitting in the front seat whereas the other two travelling by sitting in the rear. Yashika suffered injuries to the neck and fracture to the hip. The two other men are safe with minor injuries, reports said. Read : Follower Blamed Yashika For Her Friend’s Demise !! Actress Responded

On Friday, Yashika came up with a series of post, getting emotional about her friend’s demise. “My Angel” she said in a post which contained the sketch of herself and Valli Chetti Pavani.

“I hate the feeling of missing someone and not being able to do anything about it” a tweet she shared said. The next post she shared read “Once I read somewhere, Everyone in our life will have a last day with you and you don’t even know when it will be”

Here’s the screen shot of her stories :

She also indicated her recovery by sharing a reel post of a child walking :

Also Read : Yashika Replied To People Who Accused Her Of Consuming Alcohol While Driving !!