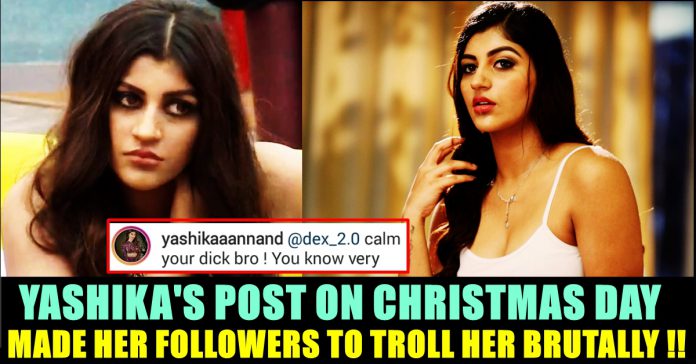 On 25th of December, Yashika posted a picture of herself in her twitter and Instagram account. The picture which was edited by one of her follower had the picture of the cartoon version actress in Santa Claus attire. Sharing this picture, Yaashika wrote “Merry Christmas 🎄 🎅 thankyou @hillustrator for this killer edit ⭐️❤️”

Check out her picture here :

On seeing this picture many of her followers admired it and wished her back for Christmas. However few of her followers didn’t feel right about the picture and started making fun of it. Few even compared the actress with popular actress Mia Khalifa. Check out some their reactions below :

(Also Read : Yashika Gives Savage Replies To Those Who Are Calling Her As Indian Mia Khalifa !!)

However it is high time for people to stop forcing celebrities to act in a certain way in their personal social media accounts. What do you think on these reactions Yashika is receiving ?? Comment your views below !!