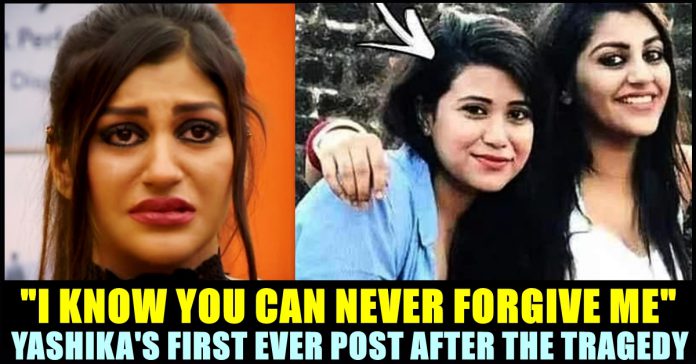 Young Tamil actress Yashika Anand uploaded a story in her official Instagram account for the first time after the horrific accident she met at East Coast Road, Chennai. Through a series of stories, Yashika expressed how much she misses her friend Pavani who died in the car accident. She also asked her fans not to celebrate her birthday and said that she won’t be celebrating it this year. Requesting her fans to pray for Pavani’s family, Yashika said that it the biggest loss of her life.

“I really can’t express what I’m going through right now ! I will forever feel guilty to be alive !! I don’t know if I should thank god for saving me from that tragic accident or blame god whole my life for taking away my bestest friend away from me really miss u each second Pavani. I know? you can never forgive me !! I’m really sorry I put your family in such a horrible sifuation. Just know I miss u each
second and I’m forever guilty to be alive. Hope your soul rests in peace. I pray you come back to me
Hope someday your family forgives me ! I’ll forever cherish our memories paw!” said Yashika in her post.

“I won’t be celebrating my birthday and request all my fans also to not celebrate my birthday! Please pray for her family! God give them more strength. Biggest loss of my life. Please someday forgive me ! I miss u” she added. Here’s her post :

“In my life, I never thought I would be the reason for you not to be with us today. RIP my beautiful angel, Love you abundantly” she said in her next post by adding the picture of her friend Pavani.

Popular film and television actress Yashika Anand is in critical condition after meeting with an accident that took place in the midnight on East Coast Road near Mahabalipuram. The actress’s friend named Valli Chetti Pavani who travelled with her died on the spot. The car, reportedly swerved from its path and struck the median strip and the images of the damaged vehicle were doing rounds in social media platforms.

Bhavani suffered severe head injuries and her body was sent to postmortem to the Chengalpet government hospital. The Mamallapuram police have registered a case and are investigating. Cases for rash driving and causing death due to negligence were registered against actress Yashika. The actress’s first ever social media post after the accident is going viral in social media platforms with several kind of reactions from her followers and online users.

Video Of Man Saying That He Got Slashed By Seeman Party Members Goes Viral !! HORRIFIC !!

We need no introduction for Seeman, a Tamil politician, Tamil Thesiyam ideologist and the chief-coordinator of the political party, Naam Tamilar Katchi in Tamil Nadu....

A series of pictures that shows actor Vijay who is fondly called as Thalapathy by his fans and former Indian captain and current captain...