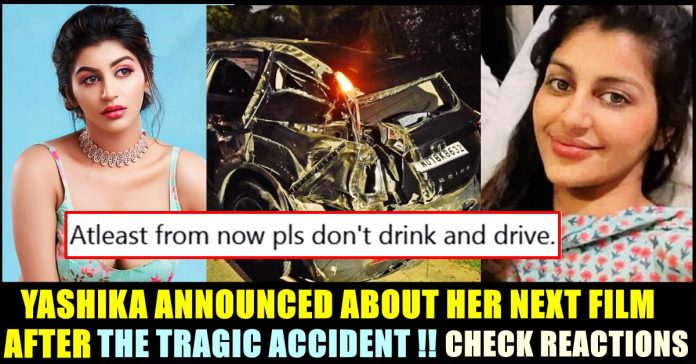 Young actress Yashika Anand announced about her first film after the tragic accident she met with weeks ago. First look of her upcoming film with SJ Suriya which is titled “Kadamayai Sei” is going to be released on the auspicious day of Vinayagar Chathurthi. Updating about the movie, Yashika said that the one side of her life is very numb and hurting. However, the actress who felt that her life has to move, on uploaded the first look announcement saying that it took many years of hard work to reach the height.

Ever since the accident took place, Yashika has been updating emotional stories to express her grief over her best friend’s demise. Now, for the first time after the tragic accident, a film of Yashika is going to see the light. First look of the film in which Yashika paired up with veteran director and actor SJ Suryah, is going to get released on 10th of September.

“One side life is very numb and hurting . And the other side life must go on… It took many years of hard work to reach till here Folded hands #KadamaiyaiSei #staytuned thank you SJ Suryah for being a pillar” said Yashika while updating about the film. Check out her post below :

One side life is very numb and hurting . And the other side life must go on ..
.
It took many years of hardwork to reach till here 🙏🏻 #KadamaiyaiSei #staytuned thankyou @iam_SJSuryah for being a pillar ❤️ pic.twitter.com/tZXvPYfsgR

Many kind of comments surfaced for the post of Yashika. With people wishing her a speedy recovery, few advised her to stop drinking alcohol while driving even it was proven that the actress wasn’t intoxicated during the accident.

No worry yash, pass is passed no one can change what was happened.. Focus on the future girl ❤ Congrats for kadamai sei 🤩 & all the best for your future projects. You're luckiest to work with SJ Suryah sir 💯 God bless you😇 Get well soon 🤞

Hope you learn from mistakes been done but life is gone can't bring back bcoz of unwanted things. Pls don't drink and driv

Doctors and Police confirmed that the actress wasn’t inebriated while driving the vehicle. Still, a number of social media users are verbally attacking the actress, saying that she must have committed the accident due to excessive alcohol consumption.

Now, Yashika herself came up with a social media post slamming people who accused her of “drunk and driving”. The actress, in her post, said that she would have been in jail if she was intoxicated at the time of the accident and not in hospital. Yashika expressed her dejection over people spreading fake rumours for so long and asked them to have some humanity and grief towards her friend who lost her life.

Here’s what the actress has to say to people who accused her of drunk and drive :

Previous articleAesha Opens Up About Divorcing With Shikhar Dhawan!!
Next article“Don’t Encourage This” – Fans Got Upset On Seeing This Promo

Amidst the furore created by the incident that took place in the 48th league of Indian Premier League, a post uploaded by the official...