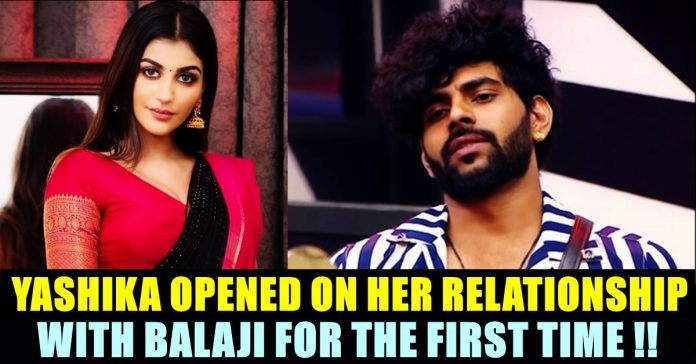 Yaashika Anand, former contestant of Bigg Boss show answered to a question related to current Bigg Boss contestant Balaji Murugadoss, asked by one of her Instagram followers in a chat session she conducted. Days ago, a video of Yashika and Balaji Murugadoss participating in a game show together did rounds in social media. Many people who are following the Bigg Boss show for a long time, speculated that the duo are involved in a romantic relationship. Now, in a way of clearing the air, Yashika confirmed that Balaji was a good friend of her during a certain period.

Balaji Murugadoss is currently enjoying his stay inside the Bigg Boss house as a participant. So far he confronted almost all his housemates and grabbed headlines for different reasons. His alleged romantic track with Shivani inside the house has a separate fan base as we could see several Instagram handles such as “Bala shivu”, “Balaji Shivani lovers” , “shivani bala addict”, “Balashivani lifeline” etc.

Balaji Murugadoss and Yashika Anand are best friends since very long time it seems. Now, in a chat session Yashika conducted, a follower asked whether Balaji is a friend of her. The follower also asked why they are not following each other in Instagram.

Answering to the question, Yashika said that they were used to be good friends and added that she is happy for the fame he is gaining now. The actress also said that she is every much aware that Balaji longed for this since many years. “We used to be good friends !! But I ‘m just happy for him, because I know how much he has wished for this day from many years !” her story read.

Recently, A three year old video of Balaji Murugadoss getting participated in a Vijay TV show did rounds in social media platforms. The Bigg Boss contestant accompanied his friend Yashika Anand as his teammate for a game show named “Connection”, hosted by actor Jagan. The comments of the youtube video are filled with reactions from the followers of the ongoing Bigg Boss season.

Joe Michael, in an interview with a popular youtube channel, said that Balaji and his friend caused a car accident and called Yashika seeking help. Joe referred an incident where Yashika Anand hit out at media for making false allegation against her in an accident case, made it sure that the accident was caused by Balaji Murugadoss who was drunk at that time. He said that Balaji and his friend rammed their luxury car into a food delivery boy and called Yashika for help when Police caught them.

“Yes, as he said his parents didn’t raise him well. If they raised him well, he wouldn’t have rammed his car into a food delivery boy in an alcoholic state. The incident was happened around 1 : 00 AM on 6th of October in 2019 at Nungambakkam. After finishing the party, Yashika and her friend left the place. After ramming the car, Balaji and his friend called Yashika for help which was wrongly portrayed in media as the crime was committed by Yashika” said Joel Michael in the interaction with Indiaglitz. Read : Balaji Murugadoss Caused Big Trouble For Yashika Anand After Consuming Alcohol ??

Previous articlePopular Actress Questioned Archana For Calling Som As “Mama” !!
Next articleWhich Film Topped The List Of “Most Watched Direct OTT Release Of 2020” ?? Check Out

Priya Prakash Varrier who rose to fame with just winking and fire gun kissing expression and she became an overnight internet sensation with millions...