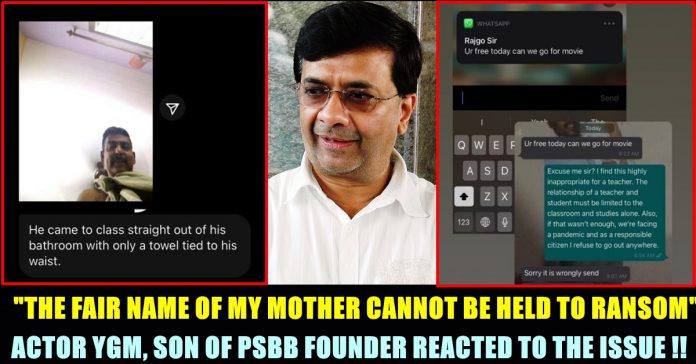 Y.G Mahendran, son of Rajalakshmi Parthasarathy who founded the Padma Seshadri Bala Bhavan (PSBB) group of schools, has sent a mail to the authorities of the school, demanding a hearing about the complaint against a teacher named Mr. Rajagopalan who is accused of sexually harassing female students. In his mail, YGM said that a severe action should be taken against the faculty if the accusations made against him gets proved. He also insisted an explanation to the parents and students if he is not guilty.

The actor and dramatist said that the fair name of his mother MRS. YGP cannot be held to ransom. He mentioned that nothing of this sort has ever happened since the inception of the school and requested a thorough inquiry by instituting a committee. Since the morning of Sunday, several social media posts, screen shots, Instagram stories, write ups has been surfacing in Internet, calling out the faculties of Padma Seshadri Bala Bhavan group of schools which is located in Chennai for their inappropriate behaviour with the students, especially towards the female ones.

I promise to take this to the concerned authorities.

A document was created for the alumni of PSBB to sign in order to take actions against Mr. Rajagopalan whose conduct, reportedly affected many female students. He passed obscene comments at female students, invited one of them to go movie with him, visited class by wearing towel and was involved in several other insensitive acts that disturb students mentally.

Singer cum MeToo activist Chinmayi raised voice supporting the former students and shared a post in her official twitter account which helped the issue to blew DMK Leader Kanimozhi, movie producer Archana Kalpathi has also reacted to the issue through their respective social media accounts along with the public. up. Former radio jockey and Bigg Boss participant Vaishnavi shared a traumatic experience about a faculty of the PBSS school moral policing her. It all started with the Instagram stories of a model named Kripali who is currently exposing the faculties of the school through the stories sent to her personally by many former/current students. Read : Students, Alumni & Public Called Out The Creepy Faculties Of PSBB !!

#ShameonPSBB for protecting this predator. Attaching a few screenshots from the stories. pic.twitter.com/jdOWl5TtW8

Reacting to the outrage, YG Mahendran, son of Rajalakshmi Parthasarathy who founded the school, reportedly sent a mail to the deans and trustees of the school, writing “I am shocked to see the social media agog with tweets and messages accusing a Teacher of PSBB KK Nagar of misbehaviour with girl students of his class. In fact a Reputed Media has sent me screenshots of the accusations going viral now on Social Media and Asking Me For Explanations. As a Responsible Trustee I pose the question.. why is it none of us have been appraised of such a thing happening especially when the parents say they appealed to the Dean and Management and got no response at all. The DAY TO DAY HAPPENINGS IN THE SCHOOL come under the purview of the Dean and Principal of the particular school branch. It is your duty to conduct an enquiry into this matter and check out the truth of the matter.”

“If the teacher is indeed guilty Severe Action should be taken against him. IF NOT the parent and student should be given a clear explanation of what really happened. They Definitely Should be Given a Hearing. Allowing it to go so far is in itself a negligence on the part of the school. THE FAIR NAME OF MY MOTHER MRS YGP CANNOT BE HELD TO RANSOM.. DHARMA MUST BE DONE. In all fairness to maintain the great legacy of PSBB created by Mrs YGP I EARNESTLY request you to make a Thorough
Enquiry even instituting a committee if necessary… Nothing of this sort has ever happened since the inception of the school.. It is in the Best Interests of the School that I write this letter to all the Trustees and to the Dean and Shri YG Rajendra. I hope these clouds will be cleared soon through
your prompt action..” the mail further read.

Previous articleStudents, Alumni & Public Called Out The Creepy Faculties Of PSBB !!
Next articleLegal Action To Be Taken Against The “Flight Marriage” Of Madurai Couple ??

After seeing the tweets posted by Vikraman against political analyst Sumanth Raman, popular Kollywood director Naveen who is known for making the sleeper hit...