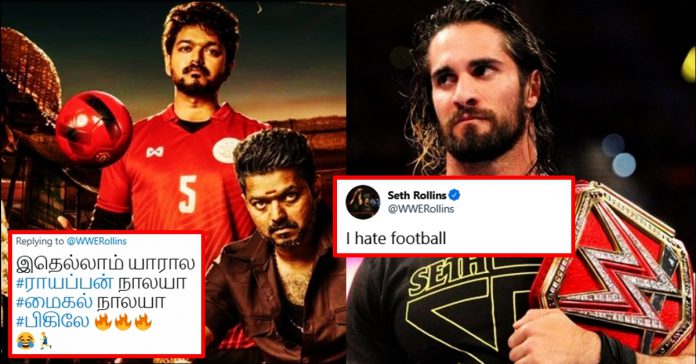 Meanwhile, popular WWE wrestler Seth rollins and current WWE Universal Champion in his second reign, has posted a tweet related to football game. Due to a unidentifiable sour experience with football game, the wrestler wrote “I hate football” through his official twitter account.

As soon as this tweet surfaced on his timeline, it went viral and reached 15k likes in a matter of hours. But the shocking fact is, the comment section of his is being flooded by the replies of Ajith and Surya fans. As far as Kollywood film industry is concerned, actors Ajith and Vijay are arch rivals only because of their respective fans. Trending hashtags against each other is taking place in Twitter every now and then.

Now the fans of Ajith and Surya are making extreme fun of Bigil movie in the comment section of Seth Rollings, despite of the fact that Seth Rollins wouldn’t have any idea about the comments he is receiving. Check out some of them below :

Worst Football movie in the world☹️

Hey You Watch the latest Indian superstar's Bigil in theatre Nearby You, After that You Love Football 😂😉

It has been a long time since actors Ajithkumar and Vijay declared as official rivals. Only on few occasions both these actors movies released together but on that day the opening of both the movies would be a deadly one.

Though the actors themselves enjoying a healthy friendship between them, verbal spats between their fans has always been a never ending one. Then it took place in movie theatres but now as social media has been an easy accessible one to every smartphone users, it is really horrific to see the comments by both the actor’s fans.

After registering his first win as the captain of Chennai Super Kings, Ravindra Jadeja dedicated the victory to his wife in the post match...