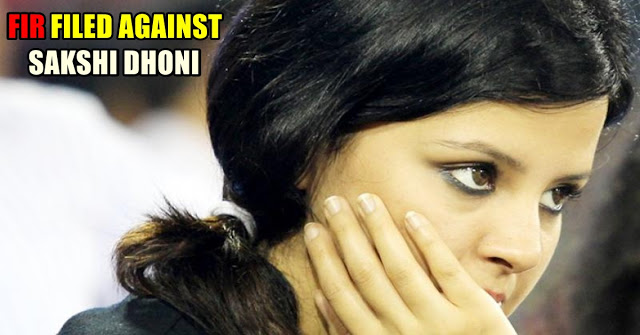 M.S Dhoni is receiving a lot of appreciation for his biopic which hit the screens on 30th of September. Fans are praising him for all the struggles that he had to face, to reach this level. While there is all goodie goodie on Mahi’s side, his wife Sakshi Dhoni seems to be in a big trouble.

Yes, an FIR has been filed against her, for her involvement in multi-core fraud case, this is indeed shocking. Dennis Arora lodged a complaint against Sakshi Dhoni and 3 others, based on which an FIR was filed under IPC section 420. Wondering what happened? Let us tell you the details.
Well Pratima Pandey, Shubhawati Pandey, Arun Pandey and Sakshi are directors of Rhiti MSD Almode Pvt Ltd, and their company has shares in Dennis Arora directed Sportsfit World Private Limited. Even his father, Vikas Arora is a co-director and owns 39% shares in it.
Now all these directors of Rhiti MSD Almode Private Limited wanted to buy Vikas’ shares and had struck a deal of 11 crores for the same.
However, Dennis has complained that till now, the directors have made a payment of just 2.25 crores out of 11 crores. In spite of giving them deadlines and warnings, they failed to pay the balance amount. Well, they were supposed to clear everything by 31st of March, but unfortunately, they didn’t.
As a response to this, Dennis lodged a complaint with Gurugram’s Sushant Lok Police Station. As of now, there are no official words from Sakshi, on this matter.

However, another partner Arun Pandey, says that it has been an year that Sakshi has left the company. So in that way, an FIR can’t be filed against her. Arun also said that the amount paid by them was more than the value of the shares. Currently the case is pending for arbitration.
Let us see what turn this case takes. So guys, what do you have to say about this? Do share your views in our comments section below.
News Source

Bigg Boss Star Blamed DMK For The Demise Of Manikandan !!