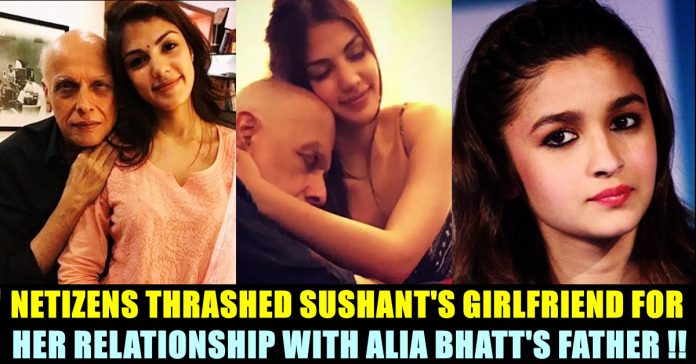 Columnist Shefali Vaidya questioned the relationship between Rhea Chakraborty and Mahesh bhatt by sharing their pictures together. The actress, who worked as TV host and became an actress through Mere dad Ki Maruti, was under scanner for past few days due to the demise of her boyfriend and actor Sushant Singh Rajput.Many blamed her for Sushant’s demise and the actress came up with an emotional post days ago to express how much she misses him.

71 year old Filmmaker Mahesh Bhatt, father of popular bollywood actress Alia Bhatt and Rhea were rumoured to be dating when the actress starred in his film Jalebi. While the duo rubbished the rumours claiming that they share a close bond, their pictures went viral on the internet. Many pictures involving them are questionable in nature and raise suspicion on the nature of their relationship. Looking at Bhatt’s personal life, his past relations, types of movies he makes, and his media image, one cannot deny the fact that Mahesh Bhatt is a person of questionable character. Many people believe that Mahesh bhatt forced Rhea to leave Sushant.

In 2018, Rhea and Mahesh Bhatt’s pictures went viral in which they were seen hugging and getting close. The photos sparked controversy and were shared by Rhea herself on Bhatt’s 70th birthday. She wrote, “Happy birthday to my Buddha @maheshfilm. Sir , this is us – you held me with love , you showed me love , and you have unclipped my wings forever , you are the “heart hitting ” fire that ignites every soul it comes by ! Words fail me I love you.” as her caption for the post.

Now, sharing the cozy pictures of them, Shefali vaidhya said that these pictures gave her creeps. She asked what is wrong with the actress as the man is known for preying young girls. “These pics give me the creeps!
Mahesh Bhatt is a known tharki lech preying on pretty young things, but WTF is wrong with this actress? Last time I felt this ugh was when pics of Digvijaya singh canoodling with Amrita Rai were shared in public. Both share the same creepy vibes.” her tweet read.

These pics give me the creeps! @MaheshNBhatt is a known tharki lech preying on pretty young things, but WTF is wrong with this actress? Last time I felt this ugh was when pics of @digvijaya_28 canoodling with Amrita Rai were shared in public. Both share the same creepy vibes. pic.twitter.com/hJKtH6qArF

Among thee many people who slammed the duo, few made comments on Mahesh Bhatt’s earlier statement on marrying his own daughter Pooja Bhatt.

Check out some of the reactions for this tweet of Shefali :

This was the one which really gave me the creeps..👇 pic.twitter.com/0r3RiD1OJd

Yes….this is just another day for him
…. remember how he wooed Sunny in big boss pic.twitter.com/F11kpc8Vn7

If that made you Cringe, take a look at this.

It looks like he wet himself when he was standing, it just looks super cringe and is obvious that even Rhea Chakaborthy is super F-ing uncomfortable!!! pic.twitter.com/DRy8Zd2Llg

Previous articleGirl Struggled To Attend Online Class Without Smartphone !! Actress Sent Her An iPhone
Next articleWhen A Producer Humiliated Vijay Sethupathi During His Initial Stage !!

Famous Hero’s Daughter Replied To People Who Made Fun Of Her Body In Style !!

Actress Keerthi Pandian, first look of whose upcoming film "Kannagi" was doing rounds in social media for the last couple of days, came up...

Swimming Coach Flogging This Girl In Swim Suit !! Parents Have No Complaint At All !! SHOCKING !!

Video of a swimming coach purportedly flogging his teenage girl student with a belt-like object at the city-based Rajpath Club has gone viral on...