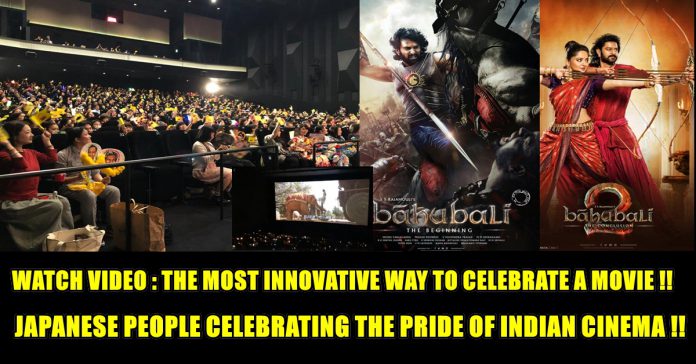 WOW Just WOW !! : You Will Be Astonished To See The Response Of Japanese People Watching The Pride Of Indian Cinema BAAHUBALI 2 !!

Baahubali 2: The Conclusion, also known as BB2, is an Indian fantasy action film directed by S.S Rajamouli and written by his father K.V Vijayendra Prasad. It was produced by Shobu Yarlagadda and Prasad Devineni under the banner Arka Media Works. Released on 28 April 2017, the film stars Prabhas, Rana Daggubatti and Anushka Shetty while Ramya Krishnan and Sathyaraj appear in prominent roles. The second cinematic part in the Baahubali franchise, it is the follow-up to Baahubali : The beginning, serving as both a sequel and a prequel.The film is set in medievel India and follows the sibling rivalry between Amarendra Baahubali and Bhallaladeva; the latter conspires against the former and has him killed by Kattappa. Years later, Amarendra’s son returns to avenge his death. The Conclusion was made simultaneously in Telugu and Tamil and later dubbed into Hindi, Malayalam, Japananese, Russia. Baahubali: The Beginning was a blockbuster, the sequel turned out to be altogether a different ball game which hit Japanese theaters on 29 December, 2017, has successfully completed 100 days in the East Asian nation to emerge as the third highest grossing Indian film of all time. The movie, which is currently in its 15th week in Japan, has grossed $1.3 million (Rs 8.5 crore) in 100 days and is only behind Superstar Rajinikanth’s blockbuster Muthu – widely known as Dancing Maharaja in Japan – and Aamir Khan’s 3 Idiots helmed by Rajkumar Hirani.

Elated with the film’s success in Japan, producer Shobu Yarlagadda of Arka Media Works, told, “We are very happy. I think it’s the third highest grossing film in Japan after Muthu and 3 Idiots there. It’s very nice to see a different culture embracing and enjoying our film. Besides box office success, the enthusiasm and love that the Japanese fans have shown are quite extraordinary and exciting. They have been actively sharing fan arts, manga and videos on social media platforms, and their blogs.” However, this is not the first time that Japanese cinephiles are welcoming an Indian film with rapturous welcome. Rajinikanth’s stardom reached an unprecedented high in Japan after the release of Muthu, which ran for nearly 180 days in 1998 and earned $1.6 million. However, the string of Indian films imported to Japan following the blockbuster success of Muthu could not match the box-office prowess of the KS Ravikumar directorial. The top five highest grossing Indian films in Japan are Muthu ($1.6 million), 3 Idiots (1.48 million),Baahubali 2: The Conclusion (1.3 million), English Vinglish ($1.2 million) and Endhiran ($1 million). Rajinikanth is the only Indian actor to have two million dollar grossers in Japan, substantiating his loyal fandom in the country. Meanwhile a special screening has been organised for Baahubali 2, which is an unusual setup as it says screaming screening where movie goers can watch the film the way they want to. Normally, cinema goers need to maintain silence while watching a film in the country. We can witness the Japan people are erupting in joy and enjoying the movie in complete enthusiasm. Watch the million dollar worth video clip here :

Everyone in the theater enjoyed the visuals of the movie very much that they simultaneously composed and performed an innovative movement by shaking their cellphone it seems which is blissful for us to watch as a first audience of Baahubali. Previous articleKXIP’s KL Rahul Trolls RCB With “EE SALA CUP NAMDE”.. Here’s What You Should Not Miss Watching !!
Next articleYou Will Be Shocked To See Director Suseenthiran’s Massive ‘U’ Turn From Banning IPL In Chennai To Supporting It !! : WHATTA JUMPP !!

Murali Vijay Posed With A Beer Bottle As A Victory Celebration !! Fans Trolling Him To The Core !!

Murali Vijay has been dropped from the Indian team for the remaining two Tests of the five-match series against England. Vijay was dropped after a...