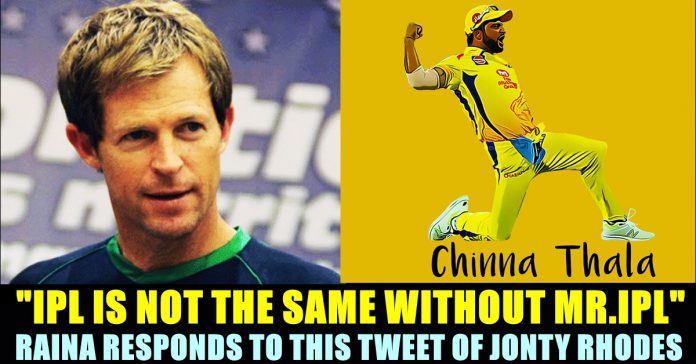 Take any recent social media post of Suresh Raina, one can see his comment section filled with requests asking him to make his come back into the Chennai Super Kings Team. The yellow team is currently struggling to win matches due to the void caused by him in the team. Recently, a rumour surfaced saying that Raina unfollowed CSK team due to a rift between the management and himself. However, the rumour turned out as fake. Now, fans who are missing Raina tagged Jonty Rhodes, one of best fielders in cricket history and asked him whether he missed him. The former South African cricketer came up with a lovely message to the fans of the cricketer.

Batting all rounder of Team Chennai Super Kings Suresh Raina who is fondly called as “Chinna Thala” by CSK fans, has been very much active in social media platforms. He who is closely watching the IPL tournament, wished his yellow team, a very best ahead of the inaugural match of the 13th edition of IPL, in a way of confirming that he won’t be returning the team in near future.

On 29th of August, it was announced that Raina is leaving UAE due to personal reasons. It was said that he will no longer be available for the whole tournament of IPL. Amidst the furore that took place followed by Raina’s exit from the Chennai Super Kings team, the cricketer came up with a couple of tweets requesting Punjab police to look into the heinous crime that caused the loss of two lives in his family.

It was also reported that Raina got disappointed with the room that was provided for him. Now, the cricketer is currently busy spending his time in Jammu and Kashmir, reportedly starting a free cricket academy for kids. Now, his fans who are missing him, asked Jonty if he misses him.

The Kings 11 Punjab’s fielding coach, said that the IPL is not the same without Mr.IPL. He also said that no player is bigger than the game cricket and added that IPL is giving opportunities to many young talents. “Of course I miss Raina and #IPL not the same without #MrIPL. Don’t get me wrong, no player is bigger than the game, and #IPL continues giving young Indian stars the opportunity to display their talents; but yes, I miss watching him play” his tweet read.

Of course I miss @ImRaina @ChennaiIPL and #IPL not the same without #MrIPL. Don’t get me wrong, no player is bigger than the game, and #IPL continues giving young Indian stars the opportunity to display their talents; but yes, I miss watching him play https://t.co/zd6xZGIDV9

It is notable that Jonty recognised Raina as the number one fielder of the current era. Rhodes heaped praise on the Indian fielder for his positive intent, adding that he has “loved watching Suresh Raina”. “I’ve been a massive fan of Suresh Raina forever, ever since he started playing,”

“So glad to have retained my number 1⃣ spot on your list all these years, @JontyRhodes8! You’ve always inspired me by setting the highest standards on the field!” Raina thanked.

So glad to have retained my number 1⃣ spot on your list all these years, @JontyRhodes8 ! You've always inspired me by setting the highest standards on the field! https://t.co/DD93jfmj5Y

Previous article“I Asked Vijay To Sing This Song Of SPB For Me” -Vanitha Pays Tribute To SPB
Next articleThe Famous RCB Girl Replied To People Who Criticized Her For Cheering RCB !!