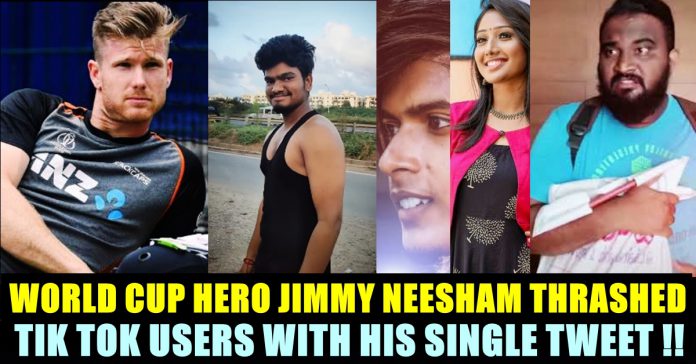 Social media platforms such as Facebook, Instagram, Twitter is a place where anyone can interact with the people they like. Back then people couldn’t interact with the celebrities they like but ever since the existence of social media platforms whoever can talk to their favourite celebrities but one couldn’t say whether they are going to get a reply or not.

In order to get a reply from their favourite celebrity, we have seen followers requesting for it in comment section and through direct message. Popular cricketer Jimmy Neesham who represents New Zealand team posted a hilarious tweet saying that he needs to block few people in Instagram who already got blocked by him in Twitter.

To this tweet, one of his follower asked whether he is active on Tik Tok or not to which the world cup finalist said “No I have self respect” which reached nearly 10k likes unlike his posts. Here’s his reply :

No I have self respect https://t.co/QqC9jWfo0M

There is a very slight chance for anyone using a smartphone who didn’t come across a Tik Tok video showing a young netizen lip-syncing to a song or popular cinema dialogue. Users of Tik Tok are calling themselves as “Musers” who spend time together by doing Tik Tok videos. In a way of elevating their innovations to next level, many users started to do Tik Toks by doing somersault, magic videos, tricks etc.

This tweet from Jimmy Neesham received many reactions from Indian Twitter users, especially from the users of Tamilnadu. Check out some of their reactions here :

It'll be in news for sure.

Jimmy is very much known for his funny tweets and replies to his followers. His online existence always entertained his followers. (Also Read : Fans Loved Jimmy Neesham’s Gesture Of Presenting Gloves To Fans !! His Reply Will Make You Laugh Out Loud !!). As far as IPL is concerned, Jimmy has played for Delhi Daredevils and Kolkata Knight Riders so far. Comment your views on his hilarious reply !!

A twenty six year old doctor who went missing since wednesday found dead at Shadnagar. This news indeed shook the entire country as many...