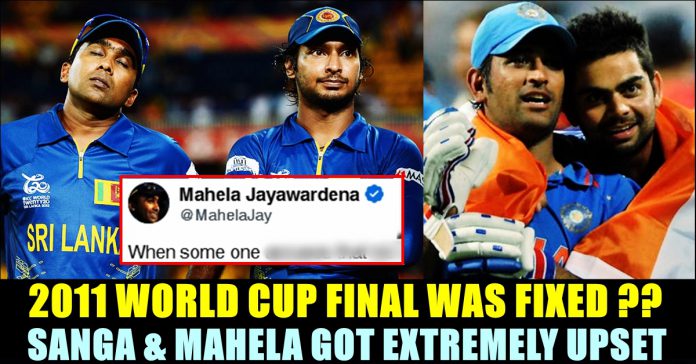 One of the memorable moment in Indian cricket history is when India won the world cup for the third time in 2011 world cup which took place in Wankhade stadium, Mumbai. India faced Sri lanka in the finals and clinched the title with Gautam Gambhir and Mahendra Singh Dhoni’s solid performance. The historical moment is attached with every Indian cricket fan’s heart till date, despite the team failed to impress them in the next tournaments. In 2019 world cup,the team which looked very strong with best playing 11, exhibited a bad performance for just 1 hour and failed to reach the finals.

Now, to our shock, Sri lanka’s sports ministry ordered an investigation after former sports minister of the country Mahindananda Aluthgamage accused the final match of the tournament for being “fixed”. He said that their national team’s loss to India in the 2011 world cup final was fixed by certain parties.

The current sports minister Dullas Alahapperuma has ordered the investigation and asked for a report on its progress for every two weeks. Aluthgamage who served as Sri lanka’s sport minister at that time, has alleged that Sri lanka “sold” the game to India. “Today I’m telling you that the game was sold by us. I said this when I was the sports minister. I do not wish to expose the details for the sake of the country. A game which could have won, was fixed.” the politician said on air.

“I state it with responsibility and I can come forward for a debate. The people are concerned about it. I would not involve cricketers in this. However, certain groups were definitely involved in fixing the game.” he added to a media channel.

Kumar sangakkara who captained the team at that time, got furious and expressed his emotion through a tweet. The cricketer asked the politician to produced evidence and submit it to the board of ICC. He said it while replying to his former teammate Mahela Jayawardane who scored a century in that match. He scored 103 runs in just 88 balls in the match.

Mahela is considered as one of a genuine cricketers of cricket history. He who felt that the minister disrespected his effort in the finals made fun of him and asked whether the election is nearing. “Is the elections around the corner 🤔Looks like the circus has started 🤡 names and evidence?” Mahela asked in his tweet which received enormous number of likes and shares.

Is the elections around the corner 🤔Looks like the circus has started 🤡 names and evidence? #SLpolitics #ICC https://t.co/bA4FxdqXhu

Captain Sangakkara, in his tweet wrote “He needs to take his “evidence” to the ICC and the Anti corruption and Security Unit so the claims can be investigated thoroughly”

He needs to take his “evidence” to the ICC and the Anti corruption and Security Unit so the claims can be investigated throughly https://t.co/51w2J5Jtpc

When Aluthgamage replied to these reactions of Sangakkara and Mahela by stating “I don’t understand why Sanga and Mahela are making a big deal about this. I am not referring to any of our players”, Mahela counter attacked by replying “When some one accuses that we sold the 2011 WC naturally it’s a big deal cus we don’t know how one could fix a match and not be part of the playing 11? Hopefully we will get enlightened after 9 years..”

When some one accuses that we sold the 2011 WC naturaly it’s a big deal cus we don’t know how one could fix a match and not be part of the playing 11? Hopefully we will get enlightened after 9 years…😃👍 https://t.co/cmBtle5dNE

Both Aluthgamage and then prime minister Mahinda rajapaksa were among the invitees at the final which was played at the Wankhade Stadium in Mumbai. Comment your views on these statements from the former sports minister and the replies made by these high profile cricketers !!