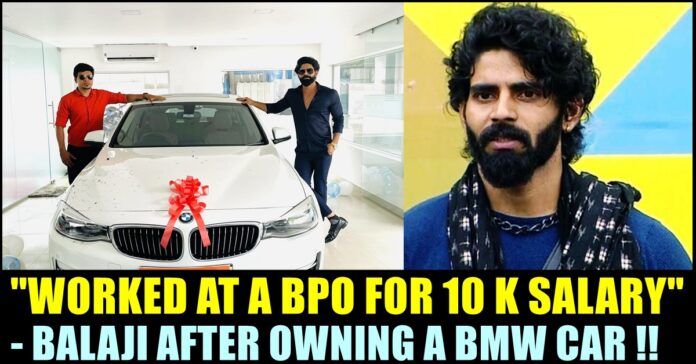 “Worked As A BPO Employee For 10 K Salary” – Balaji Murugadoss After Buying A BMW !!

After posting the pictures and videos of himself owning a brand new BMW car, Bigg Boss fame Balaji Murugadoss came up with an emotional post expressing his love towards his elder brother Ramesh Murugadoss and the sacrifices he made during their early days. Ramesh is known for entering the Bigg Boss house in the fourth season as a guest during the freeze task. Sharing his pictures with him, Balaji said that everyone should have a brother like him.

Gaining a separate fanbase for himself, Balaji was expected to make his debut in Kollywood film industry as soon as getting out of the house. Pictures of himself signing for a project of producer Raveendran surfaced and the working stills of Balaji as student were also released in the internet. However, first film of the youngster is yet to hit the screens.

In the meantime, Balaji took part in the ultimate version of the Bigg Boss show and became the winner effortlessly. He received the trophy from actor Simbu aka STR who was hosting the show at that time. He is also busy engaging his audience in Instagram by uploading stories and posts as he is enjoying nearly million followers.

On Tuesday, Bala came up with a post in his Instagram announcing about the new BMW car he bought. Adding “Happy day ❤️🙏🏼” as his caption, the video showed him unveiling the car cover in the showroom.

In Twitter, Bala came up with a post expressing his love towards his brother Ramesh Murugadoss. The upcoming actor said that Ramesh used to work in a BPO for 10K salary and would give 3K to him for supplements and took only 1k for himself with rest of the money going to their parents for family expense. Bala felt that everyone should have a brother like him and thanked the universe for the achievement he made.

“He worked as a BPO employee for 10k salary from morning 8 to eve 10 during my college days, takes only 1k for his expenses but gives me 3k for my supplements and 6k to my parents for house expenses. Everyone should have a brother like him. Thanks universe” read the caption of Balaji Murugadoss’s post.

He worked as a BPO employee for 10k salary from morning 8 to eve 10 during my college days, takes only 1k for his expenses but gives me 3k for my supplements and 6k to my parents for house expenses.
Everyone should have a brother like him.
Thanks universe pic.twitter.com/G5LRAgVBa1

Previous article“I Can’t Represent India At The Commonwealth” – Unexpected Statement From Neeraj Chopra !!
Next articleCrowd Chanted “DK,DK” While Vijay Was Fielding At The Boundary !! Here’s How The Cricketer Responded

Vijayakanth better known as or Captain vijayakanth or Vijayakanth, is an Indian politician and film actor. He was the Leader of the opposition of the Tamilnadu Legislative...