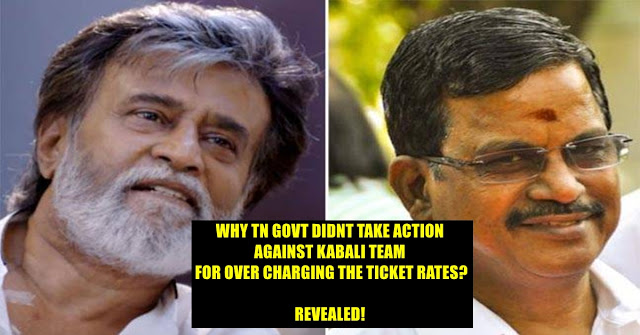 Tamil Nadu theatre owners have to follow a strict rule. The prices for their tickets can’t be more than 120. Not for Rajinikanth’s Kabali. The film which will storm the box office this Friday has already experienced a stupendous spike in its advance bookings and the first three days seem to be sold out already.
But there’s something shocking happening in some of the theatres. Although Rs 120 remains the upper limit for tickets in the State, few theatre owners are using the crowd frenzy for the Rajinikanth starrer to their advantage and are selling tickets at exorbitant prices.
Imagine one ticket of Kabali for Rs 600? That’s almost 5 times the original price. “Most theatres across the state (Tamil Nadu) have sold out tickets for the opening weekend. With the average ticket costing Rs 600, most ardent Rajinikanth fans are disappointed that they couldn’t afford the tickets on the first day,” trade analyst Trinath told IANS.
The film is being distributed by Gemini film circuit according to the sources and due to the drastic increase in the price G.Devarajan have lodged a stay order at the madras high court.
The Madras high court on Tuesday declined to entertain a writ petition that sought to stop the producer of Rajinikanth- starrer ‘Kabali’ and theatre owners from collecting ticket fare in excess of what has been fixed by the Tamil Nadu government.“Why are you targeting films featuring top actors, or those produced by a particular banner,” asked Justice N Kirubakaran.Pointing out that the petitioner, G Devarajan of Sembiam, sent a representation to authorities only on July 15 and then rushed to court alleging inaction, the judge dismissed the petition.“The petitioner gave representation only on July 15, and it is not known whether it has reached the hands of the respondent-authorities, and without giving sufficient time to the respondents, the petitioner has approached the court seeking a mandamus, that too seeking an interim relief against the film’s producer S Thanu, who is the private party, restraining him from releasing the movie. So the petitioner has approached the court without sufficient time to the respondent,” the judge said.

Dismissing the petition, he, however, said it was open to the petitioner to approach the court after ascertaining whether his representation had reached the respondent or not.

Tamil Nadu has a government-mandated cinema ticket fare ranging from Rs 10 to the maximum of Rs 120.

The petitioner, during arguments, told the bench that despite at least three court orders, theatre owners continued to collect ticket charges in excess of the statutorily fixed rate.

Noting that the film is scheduled to be released on July 22, Govindarajan said he had sent complaints to the authorities hoping that they would investigate the matter and take immediate action. “To my dismay, the complaint is still pending without any action. All cinema owners, without any fear of law, have decided to collect charges for cinema entrance tickets illegally,” he said.

Now we know the reason behind the price why it is so very high!, Yes because Madras high court did not accept the plea for a valid stay order which stated kabali ticket overcharging..! Do share your views on this by commenting down in the comment section below.