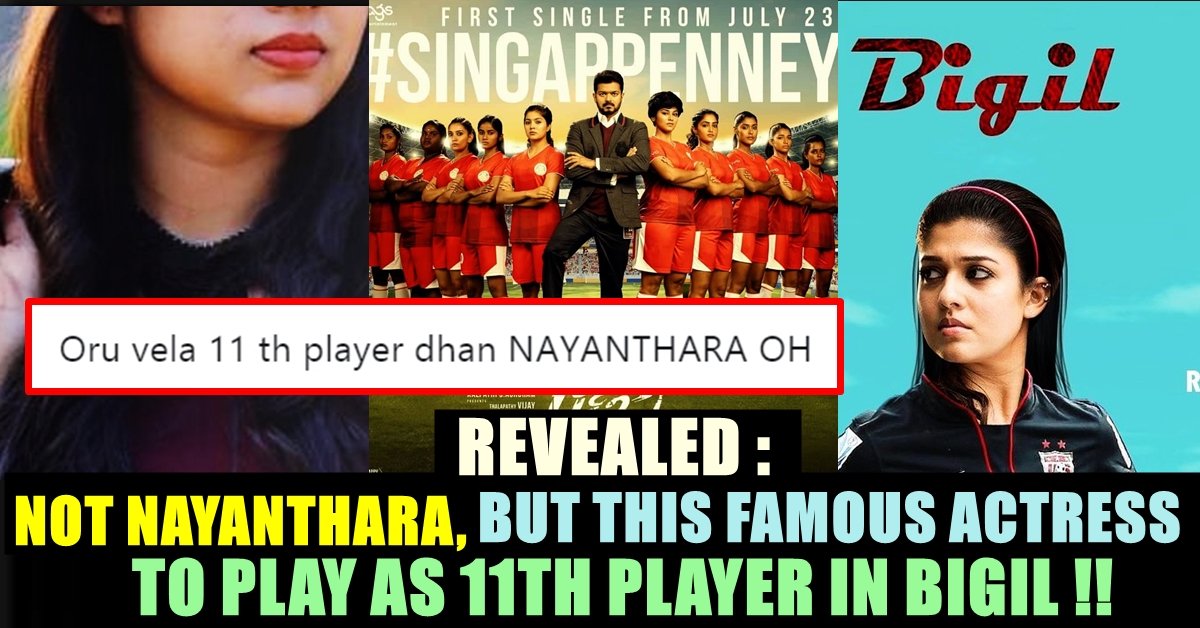 Vijay and director Atlee’s third collaboration, after the successful Theri and Mersal, has been titled Bigil (meaning ‘whistle’ in colloquial Tamil). Fans of the actor have taken over Twitter yet again as the first single released yesterday.The fans of Thalapathy have gone gaga over the news as they have been waiting for a promo of the film for a long time.

Going by the lyrics written by Vivek, this song will appear at a crucial time in Bigil, when Vijay coaches the Tamil Nadu women’s football team. The musical arrangement and the song, in general, is inspiring to listen to. Along with the song, the makers released the lyric video as well.

Meanwhile the main poster for the song raised the eyebrows of many as there were only 10 players featured in the poster. Everyone made many assumptions to guess the 11th player of the team. Even few in Twitter said that Nayanthara is the 11th player playing in the team.

Is the 11th player may be nayanthara or what else
They intentionally not reveal the 11th person who is going to be https://t.co/QRyNKlK4G5

ATLEE FOR THE REASON🔥🔥🔥 pic.twitter.com/uEcCOFQl0u However, it is a mere buzz and the actress who played the role of the 11th player has revealed it herself. Varsha Bollamma who is known for her appearance in films like  96, Yaanum Theeyavan, and Kalyanam has played the role. In her  tweet she said “Yes, that’s me 😄🎀 11th player #Singappenney #bigil Blessed.”

Earlier it is also revealed that Robo Shankar’s daughter playing as one of footballer in the film. Apart from them, “Meyadha Maan” fame, Indhuja also playing a role as footballer. Kathir, Daniel Balaji, Anand Raj, Jackie Sheroff are doing supporting roles in the film. It is also rumoured that Bollywood Superstar Shah Rukh Khan is playing a cameo in Bigil’s one of the song.

“This Is Why Losliya Abandoned Me” Mohan Vaidhya’s Shocking Statements !!
OFFICIALLY CONFIRMED : Vijay Sethupathi To Act In The BIO PIC Of This World’s Best Cricketer !! Check Reactions !!