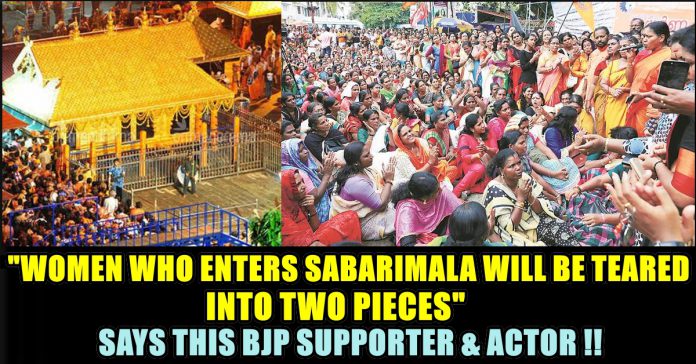 Malayalam film actor Thulasidharan Nair, also known as Kollam Thulasi, said on Friday women who dare to enter the Sabarimala temple in Kerala would be ripped into two pieces and one will be thrown at the chief minister’s office and the other sent to New Delhi.

The actor, a supporter of the Bharatiya Janata Party (BJP), said that real devotees can’t accept the entry of women into the hilltop shrine dedicated to Lord Ayyappa and hoped women from Kerala won’t enter the temple. He said those who dare to enter the temple should also face its consequences. His controversial statement came when he was addressing a protest rally of the BJP in south Kerala’s Kollam.

The Supreme Court had in September lifted a centuries-old ban that prevented women of menstruating age from entering the temple in a 4-1 majority verdict, saying divinity and devotion cannot be subject to the rigidity and stereotypes of gender.

After the verdict, a majority of women have said saying they have no plan to visit the temple and that they were ready to wait. The BJP and outfits affiliated to the Rashtriya Swayamsevak Sangh (RSS) are spearheading a state-wide campaign against the verdict.

Nair is known for his controversial statements. He had openly supported actor Dileep, who is out on bail after being arrested for allegedly abducting and molesting his colleague in Kochi last year. Interestingly, he made the statement of support when the BJP’s state unit president PS Sreedharan Pillai was on the dais.

Leaders of the ruling CPI(M) have complained to the police about the controversial speech. A senior officer said action will be taken against the actor after examining the tape of the speech.

He told the crowd at the event: “You mothers should go to Sabarimala. Because some women will come there. They should be torn into two pieces. One portion should be thrown to Delhi and another to the room of the chief minister. I know, you are not going… because you are all educated and sensible… Ayyappan has started working.. the mind of Devaswom minister has started changing.’’

With Sabarimala temple slated to open next week for the monthly ritual, the event was one of the many organised by temple stakeholders and BJP-led agitators as part of their campaign to prevent the entry of women. The erstwhile royal family of Pandalam, which owned the temple before Travancore Devaswom Board took over, said the faithful would block the entry of women to the hill shrine. “Our agitation is not backed by any political party or organisation. However, we are getting support from the faithful. Women will not be allowed to go to the shrine. They would be blocked at all roads leading to the hill shrine. The protest is not limited to any region. Even outside Kerala, there is strong resentment against implementing the SC verdict,’’ said royal family member R R Varma.

The ruling LDF, which had promised the court to not challenge its order, has decided to launch a counter-campaign against the protest by the Hindu organisations. LDF convener A Vijayaraghavan said it would organise gatherings at panchayats to drive home the point that it is the state government’s responsibility to implement the apex court order. Devaswom Board Minister Kadakampally Surendran told the media that the devotees are now getting convinced about the government’s stand. “They have realised that the BJP and the RSS are trying to exploit the verdict for communal agenda,’’ he said.

The minister also countered the Sangh Parivar allegation that the government is pocketing the wealth of temples. He said the government spent Rs 70 crore for the development of various temples, including Sabarimala, in the last fiscal. This year, development activities costing Rs 200 crore are already underway, he said.

The Congress, BJP and various Hindu organisations have launched protests demanding the state government file a review petition against the verdict. But, the ruling Left Democratic Front (LDF) government has maintained that it would not go in for a review of the ruling.