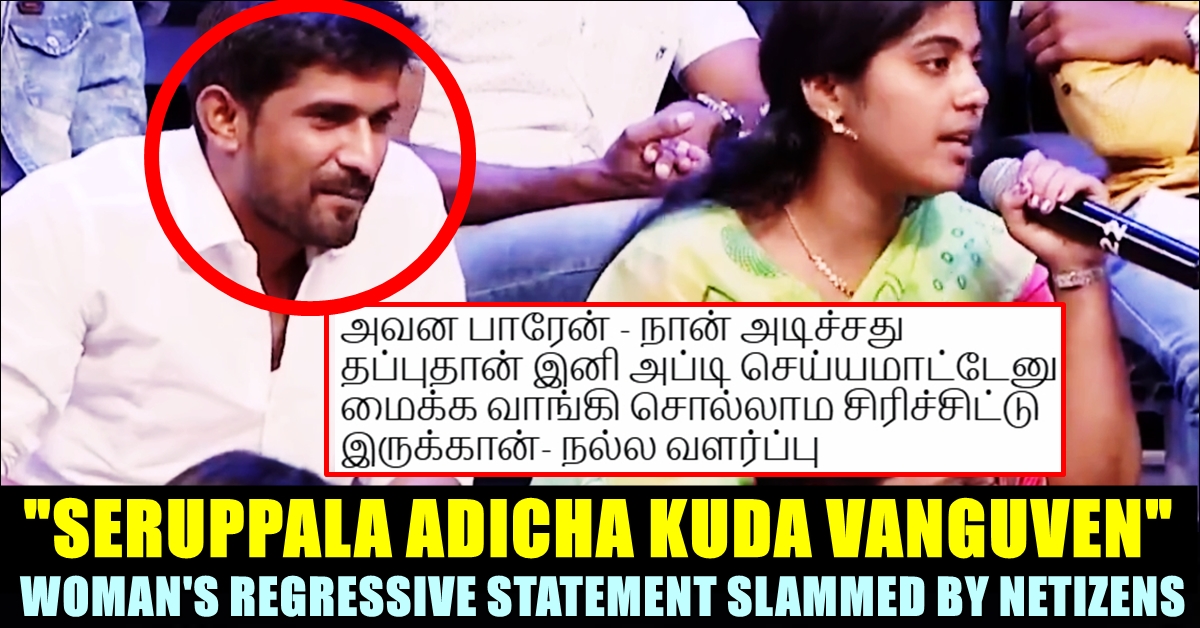 While many female activists are protesting in social media platforms against the inequality between women and men in daily basis, a Tamil nadu based woman confessing that she could get beaten by her husband even with slipper, raised the eyebrows of the netizens. She said it in a popular talk show “Neeya Naana” of Vijay TV and this particular clipping released as a promo by the channel.

The woman says that she loves her husband when he gets angry and admits that she has no objection regarding it. To our shock, She confesses that she got beaten by her husband in public several times. When Gopinath, the host of the show asks, how she couldn’t feel ashamed of it, the woman replies by saying “Enn Lovvu sirr athuu” (He is the love of my life) to get applause from the spectators and other participants present there.

“It has been already decided that my entire life is going to be with him. It is just a small sacrifice comparing to what he is doing for me” she said which made her husband blush. “When I am supposed to do anything for him, a simple “beating” is nothing.” she added. “Even I am ready to get slipper shots from him right here, right now because I am ready to anything for him” the wife said which shocked the netizens in big time.

Several number of people in social media are reacting to this particular clipping in various ways. However, majority number of them stated that the woman’s thoughts are regressive and provoking men to beat women more and feel special. “You try beating him for once, that’s when you will come to know about his love towards you” said one of a user whereas another one said that he now understood why Arjun Reddy became massive hit in Tamil nadu.

So many things are wrong here. The woman, the guy smiling as if he won a gold medal, but the worst- the audience that claps. https://t.co/ML114B4quQ

Is this girl suffering from Stockholm syndrome?If not,do her parents wish her to be married to an abuser?Will this girl allow her daughter to marry such an abuser?Was she too desperate to be in a relationship that she settled for an abuser just for the sake of being with someone?

It doesn’t happen in developed countries . Same man gets hurt when his daughter beaten by her husband . India need to change this . Women has to know their rights , they should be assertive . They have equal rights . Feel bad for women’s

I wished she got that seruppadi that she was looking for, right there in the show. No self-respect whatsoever? https://t.co/pIi0EcFE3X

Many more people are still slamming the woman for her complex mindset and her husband’s grim. Few even worried about their child and his/her future. Comment your views on her stand !!