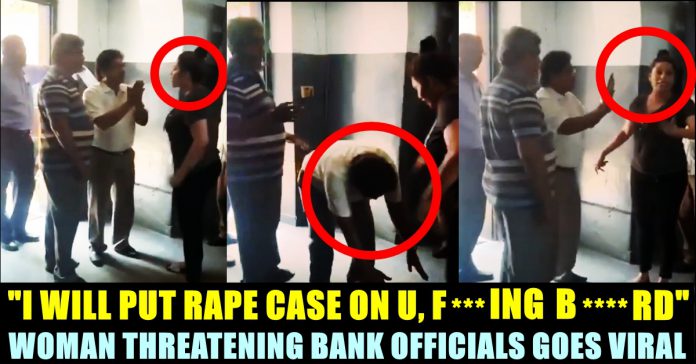 Since the outbreak caused by COVID 19 virus affected India, people are struggling to meet the ends. The lockdown implementation of central government to prevent the spread of the virus left many people unemployed. Debts they bought went unpaid for months and they are subjected to the mental pressure of their loaners. While majority number of people switched their field, worked double shift to make many and to pay their debts amidst this COVID 19, this mid age woman had other ideas it seems.

In the video, when one of the bank official trying to explain her the situation, the woman who came in to rescue her husband who bought the loan, can be seen loudly shouting “You don’t raise your hands, you stand away from me, I will put you on a rape case, Stay away from me”

When another employee questions her about the payment, the woman says “What ?? There is a way to ask payment. How are you?” she shouts who further warns the elderly man to beat with her slipper by calling him as “ba*tard”. “Fuc*king Ba*tard, How dare you talk to my husband like that?” she rages bank officer. “Neenga ulla ponga, Neenga Ulla ponga, nan paathukren” ( You go inside, I will take care) she can be heard saying to her husband in Tamil language.

To the one who is shooting the video, the woman asks to put a rape case and pushes the officer in a violent way. “Ayo, I am pretty stressed up, he raped me. He assaulted me. I will put rape case.” she shouts and goes on to abuse the elderly officers in extreme bad words.

She further asks the bank official to fall in her husband’s feet and threatens to post the video in facebook. Even after one of the bank employee touches her feet to make her stop shouting, she shouts more and wants to go to police station. However, the identity of the woman and the location is still unknown.

As soon as this video surfaced in Internet, it created outrage among the netizens who are demanding arrest against the woman for her false accusations and abuse of feminism.

Bank Officers went to take the physical possession to recover public money as per the SARFAESI Law.

Is this real or a skit? Bank officers pleading hopelessly as beggars, twiddling their thumbs while getting abused in the choicest language by a roguish woman? Why not they send a legal notice or delegate a professional recovery team?This pathetic scene is extremely disturbing. https://t.co/iPtTjSel5G

Bank people came home to do recovery of a loan, justlook at this woman’s audacity the way she has behaved with them! At this rate what recovery can happen? Hope she’s identified and punished. Her id : @sangeethagopal_official

Comment your views on this atrocious behaviour of the woman towards the bank officials !!