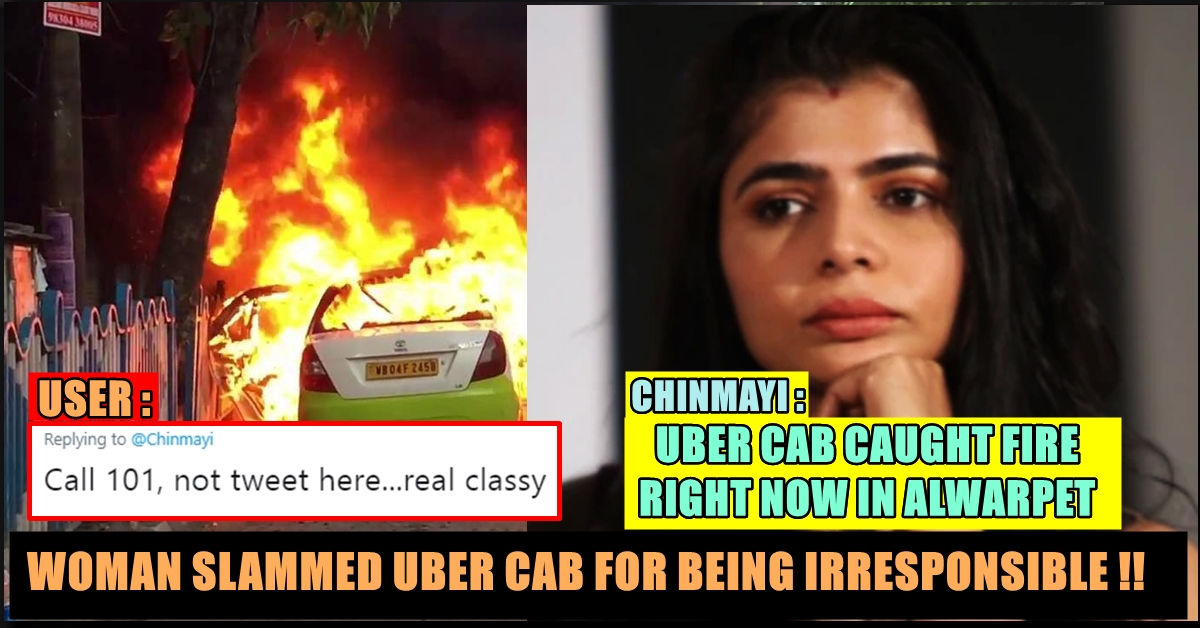 A Chennai-based celebrity costume designer had a narrow escape after the Uber cab she was travelling caught fire. The incident happened on Saturday night when costume designer and stylist Pallavi Singh was returning home on an Uber cab. 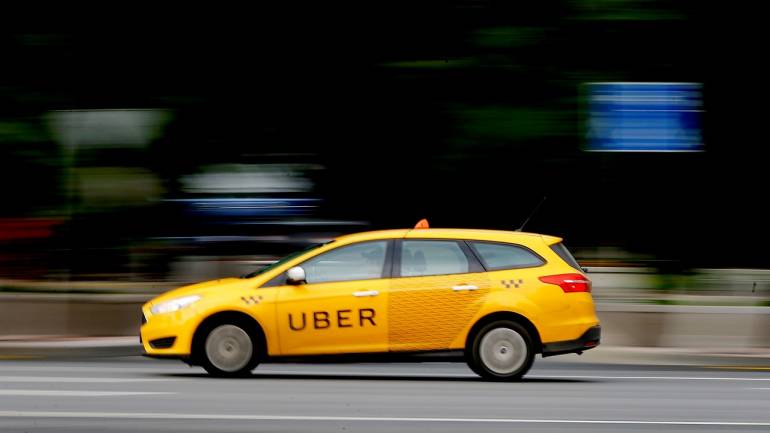 In a recent case reported from Chennai, a silver Indica car went up in flames at the TTK Road on Saturday night. Both the driver and the passenger left the car on time.

A usual Uber journey turned into a traumatic experience for a woman commuter when the cab she was travelling in caught fire and burst in flames. The passenger Pallavi Singh sensed a burning smell coming from the car. While she dismissed it initially, she soon realised the risk when she spotted smoke coming out from the AC ducts of the car. 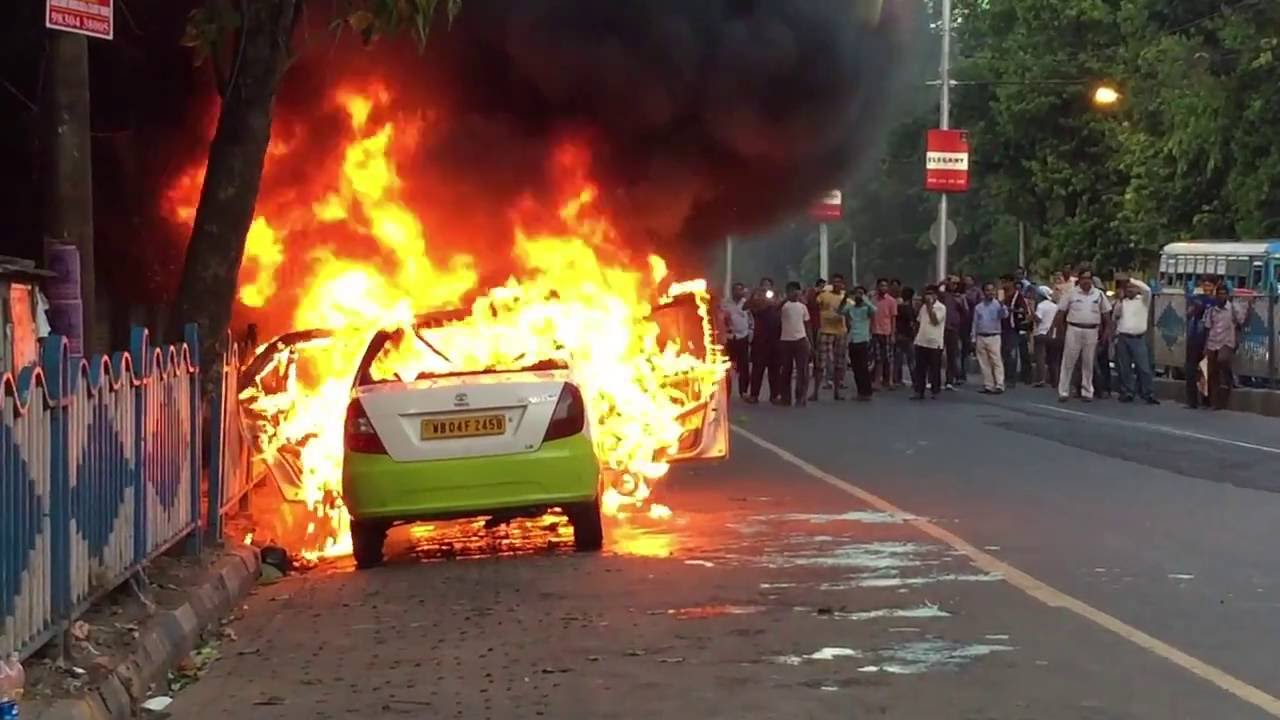 Singh then took to Instagram and Twitter to share her ordeal along with a video of the burning car. According to her post shared on January 13, though she alerted the driver, he did not seem to react, until people from other cars informed them about the sparks coming from under the cab and asked them to pull over. Fortunately, the two deboarded soon after which they saw it burst into flames, narrated Singh in her post.

“We stopped and exited the car, only to see it burn down to ashes, and along with it my bag containing my IDs, Dailies and Wallet. I came to know that only the metal skeleton of the seats remained. It was undoubtedly the scariest moment of my life. I cannot get that image out of my head,” Singh wrote. 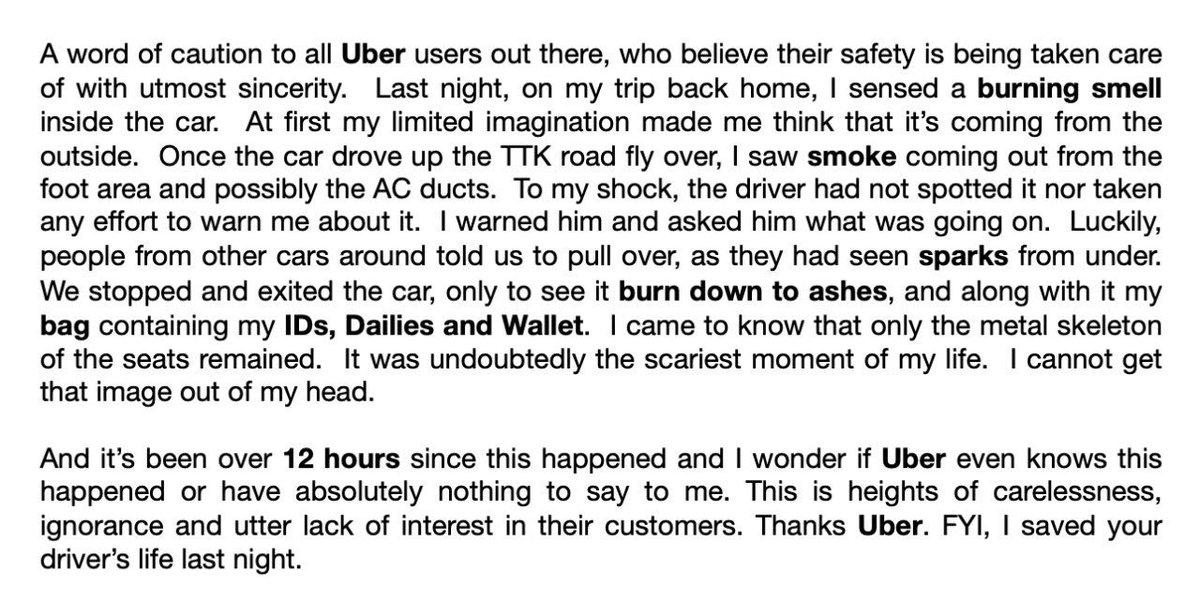 Claiming that Uber had not contacted her even after 12 hours since the incident, she wrote, “And it’s been over 12 hours since this happened and I wonder if Uber even knows this happened or have absolutely nothing to say to me. This is heights of carelessness, ignorance and utter lack of interest in their customers. Thanks Uber. FYI, I saved your driver’s life last night.”

To this a user asked her to call to 101 instead of tweeting it without knowing about the whole incident :

Here’s how Chinmayi replied to her :

Can you stay updated and see what happened? It happened to Pallavi singh, a stylist, this was an Uber and she ended up saving the driver’s life. Read everything and then respond. And YES 101 was called!!!

Sorry if I’m not the one living my life 24/7 on twitter. She’s not in my list and you uploaded this video, not retweeted it…

Reacting to the incident, Uber told indianexpress.com that they reached out to them both and ‘applauded the rider for quickly bringing this issue to their attention.’ “There’s nothing more critical than the safety of our riders and driver partners and we standby to assist the law enforcement with any information they might require,” they said.