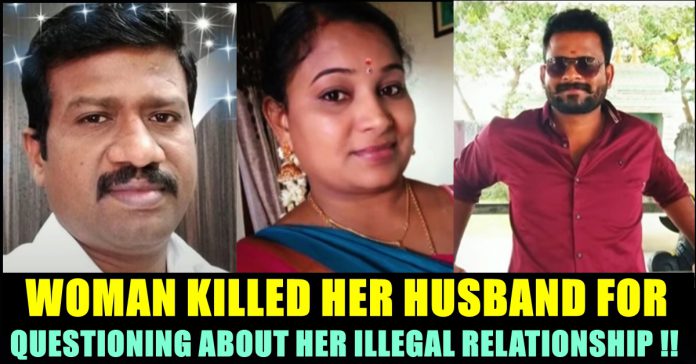 Woman named Vimala Rani caught killing her own husband for questioning her illegal affair with their neighbour. After involving in a romantic relationship, Thanga Velu and Vimala Rani married each other and have a son. Weeks ago, the whole family was missing which made Thanga Velu’s father to register a complaint in the police station. While police were investigating, Vimala Rani appeared in the police station with her son and confessed about murdering her own husband during an argument that took place due to her illegal affair with a man named Raja.

Thangavelu belongs to Aathanancheri, next to Somangalam whcih is located in Kanchipuram district. The couple have a son who is 14 years old as of now. Sakthivel, brother of Thangavel phone called him repeatedly and didn’t get a proper response from his brother. When Sakthivel and his father visited Thangavel’s house, there was no one in the house and the father registered a Police complaint in the Somangalam Police station.

On the night of August 10, Vimala Rani appeared in Police station with her son Harish. She confessed about killing her own husband to the Police officials. While living in Salem with her husband Thangavel, Vimala Rani fell in love with a man named Raja who was a neighbour. Thangavel who realized that his wife is heading to a wrong path, shifted his work place to Somangalam from Salem. However, the relationship between Vimala Rani and Raja continued for 7 long years even after the house shifting.

Report suggests that Raja visited Vimala Rani during the absence of Thangavelu in his house. The husband who came to know about it, condemned his wife but Vimala Rani refused to do it. On 28th of last month, during an argument that took place between the duo, Vimala Rani who got angry killed her husband by slashing him with a sickle that is used to cut vegetables. Vimala Rani confessed about the same to the Police.

She reportedly hid the body in her bed room till the night of 28th July and called raja to help her dispose the body. When police searched the body in the place where Vimala mentioned, they couldn’t find one. When police interrogated Vimala Rani again, she reportedly said contradictory statements. After a serious investigation, it was revealed that Raja ignited the body of Thangavelu to hide the identity. Police after transforming the “missing” case into “murder” case, arrested Vimala Rani and a search is on to nab Raja who helped her. Police requested married couples to approach court and get legal separation in case of misunderstandings and requested them not to involve in violence which will ruin the future of children.

Previous articleAmerican Brand Made Lungis & The Price They Fixed For Per Piece Shocked Indians !!
Next articleWhen Mysskin Trolled Vijay & His Father For Changing The Scripts Of Filmmakers !!

Abishek Raaja who recently got evicted from the Bigg Boss show, opened on the viral controversial video which did rounds alleging that the movie...