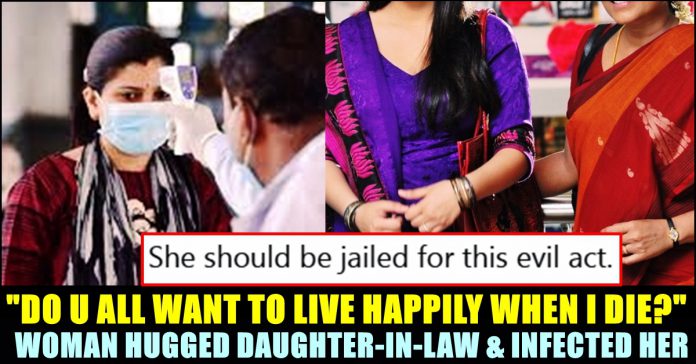 Woman Hugged Daughter In Law After Testing Positive To Infect Her !!

Frustrated over her family members keeping a distance with her after testing positive for the COVID 19 virus, woman in Telangana decided to infect her daughter-in-law by embracing her. The shocking report surfaced after the victim narrated the ordeal she went through in a video interview as she was thrown out by her in-laws after getting infected with the virus due to the hug she received from her Mother-in-law.

The incident took place in Somaripetta village, Rajanna Siricilla district that is located in North Telangana. According to reports, the woman who was isolated from her family members after testing positive for the COVID 19 virus, couldn’t tolerate the social distance maintained by her daughter-in-law who is in her mid 20s. Other family members, including her grand children weren’t allowed to go near her which left her dejected. Food was provided to her at a designated area.

According to Times of India, the young daughter in law said that her mother in law was upset over the fact that everyone kept a distance with her. These behaviours of her family members made the woman to think of infecting her daughter-in-law by hugging her. “My mother-in-law hugged me saying that I should also get infected with Covid-19,” the daughter-in-law said said to health officials in a video interview, according to a report of Times of India.

While hugging her daughter-in-law, the woman reportedly said “Do you all want to live happily when I die”, according to a statement made by the victim. She was accompanied by her sister to the hospital. The daughter-in-law is currently isolated at her sister’s house in Thimmapur village which is located in the same district. It was two revenue department officials who visited the daughter in law in her house and provided the treatment required for her.

The incident grabbed the attention of the netizens who started criticizing the mother-in-law for involving in such inhumane act. “Shouldn’t this be treated as attempted murder?” a social media user wrote whereas another one said “I am thinking about the man torn between two women in his life!”

Check out some of the reactions that surfaced in social media platforms below :

And then people get pissed off when you talk about wanting to live as a nuclear family and away from in laws 🙄 https://t.co/OKtlWQHlac

She should be jailed for this evil act. https://t.co/mdsIvf8xB7

Shouldn't this be treated as attempted murder?

I am thinking about the man torn between two women in his life!

Previous article“Doctors Life Matters” – Back To Back Attacks On Doctors Left Them Dejected !!
Next articlePeople, Celebrities & Politicians Of Karnataka Got Upset Over This Google Result !!

After directing 4 films in Tamil, Atlee became one of the leading filmmaker of Kollywood. Many news regarding his next venture has been...

Rajini Fans Expressed Their Anger To Sirman !! Check His Reply !!

Darbar starring Rajinikanth released yesterday and is being celebrated by the fans who watched the movie. Darbar released in theatres yesterday and fans are...

“My Girl Friend Sarah Asked Me This” – CSK Player After Going Unsold !!

The most awaited IPL auction is currently progressing with unexpected twists and turns. About 1114 players had registered themselves for the auction. Only 292...