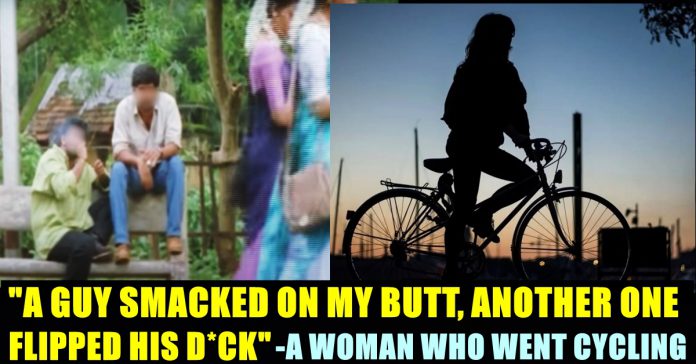 The fear being faced by women in our country due to the existence of men is increasing in daily basis. Women have been made to face all kinds of violence, physical abuse, denial of right to live, subordination and neglect all these years as sexism and discrimination are as old as the human race. The acts of abuses like eve-teasing, physical harassment, mental torture, making sexual coloured remarks, A demand for sexual favours, verbal or non-verbal conduct of sexual nature, showing pornography, flashing private parts are few of the threats that are being made by men against women who wish to go alone in our democratic country.

India is considered to be one of the world’s most dangerous country for sexual violence against women. According to the National Crime Records Bureau, one woman is raped every 20 minutes in India.While leaders and influencers are seemingly working hard towards a country that is safer for women, the situation worsens day by day it seems. A thread shared by a woman in Twitter stands tall as an example to make us realize how dangerous it is for women to survive in our place without the fear.

The woman who has been cycling for 2 months now, shared the trauma she went through every time she stepped outside, no matter what the timing slot is. “I have gone at 5 AM, 6 AM, 7 AM, 7 PM, 8 PM, 9 PM. I have one bad experience at least, no matter which time slot.” she says in her tweet. She who loves cycling and walking, never did it without fear due to the men who are waiting outside only to get high by harassing women.

She who explains how a lot of men get too close to her when she is walking in the morning, goes on to share how a man on cycle flipped his dick and how she got smacked on the butt 3 weeks ago, at 6 30 AM.

And all I do is make them worry more. A man on cycle has flipped his dick. When I walk, A LOT of men get toooooo close as they pass by, I was smacked on the butt 3 weeks back, AT 6.30 AM.

The woman says that she is always fully clothed with a mask on. “I know how to slap or throw a punch but I have never been able to do it. I never enter the nice lanes that have less traffic because I know my mom is freaking out at home.” she wrote in her tweet who worried that there is no right time for her to be out. She says that she is feels so tired of facing the men outside,

There is no right time for me to be out. I also cannot stop it because I love it. I cannot ensure company all the time. I am not surprised, I am not angry, I am not sad, I don't cry anymore, but I am so so so so tired.

She went on to explain how a man kept following her even when she rode on the wrong side and smiled at her to freak her out and how a bunch of men laughed when a guy once made a filthy dirty sound. She said that the man who followed her liked the fear in her and believed every man do.

I wear earphones but never put both in. A guy once made a filthy dirty sound and said the worst three words. The women know. They have heard it. I have seen other men laughing when they see it happening.

She also narrated how men scared her when she was riding down the slope which almost made her to ban on the wall. “I hate men, will always do. All of you are trash. If you tell me that things have gotten better, I will punch you. This is just 2 months of cycling. And every other man on the road is a potential threat.” She said who wanted people to raise their son beter.

I am just fucking tired. We all are fucking tired. I hate men, will always do. All of you are trash. If you tell me that things have gotten better, I will punch you. This is just 2 months of cycling. And every other man on the road is a potential threat.

Raise your sons better. This fear is abnormal. I don't know what carefree is. No woman does.

This tweet filled with reactions from other women explaining similar experience they went through in the past. “Women have to give up cycling, doing simple things they love because …” wrote Chinmayi,the Metoo representative of South India, by sharing the tweet thread.

Women have to give up cycling, doing simple things they love because … https://t.co/MfLTzeh0y1

Rohit Sharma Uploaded A Romantic Post For His Wife !! Chahal Completely Ruined It !!

Instagram has always been an exciting platform whether one likes it or not. When it comes to cricket, the players use Twitter to express...

Top 10 Places To Eat The Best Biriyani In Chennai.. Strictly For Biriyani Lovers !

Vijay Fans Can’t Keep Calm After Seeing This Tattoo Of A KKR Player !!

Fans of actor Vijay couldn't keep calm after seeing a tattoo printed on the arms of mystery spinner Varun Chakravarty who is playing for...