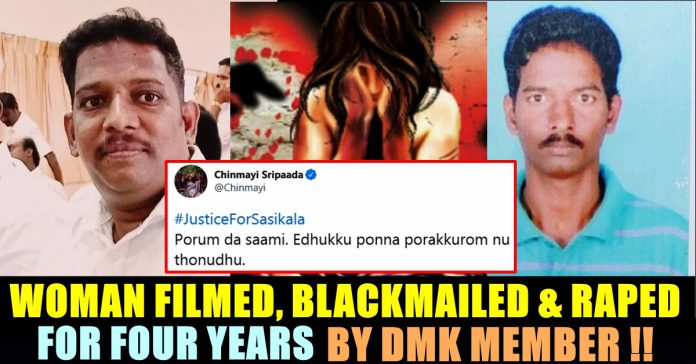 Within 24 hours of the hashtag “Justice For Jayapriya” surfaced in social media seeking justice for a 7 year old child, a new hashtag “Justice For Sasikala” trending in the micro blogging social media site. Reports suggests that a 25 year old girl was murdered after being continuously raped for four years by DMK youth wing office bearer Devendran and by his brother Purushothaman. She was killed at Nainaar Kuppan near Cheyyur in Chengalpattu district.

It has been said that Devendran and his brother Purushothaman had secretly filmed her bathing and threatened to spread it on social media. They were using her for their sexual desires for past four years and killed her when she refused to comply with them. Named as Sasikala, the victim was working in a private company and belongs to Nainaar Kuppam. It is believed that Sasikala was forcefully hanged by the Devendran-Purushothamman brothers. Sasikala’s mother Chandra firmly told media that the place Sasikala was seen hanging could not be reached by her. “It was them (Devendran & Purushothamman) who killed her and hanged her and reported it to police before us. They pretended like her brothers and ruined our entire family. They won’t have a better future” cursed Sasikala’s mother by shedding tears. Currently both the accused absconded.

Meanwhile Arun Babu, elder brother of Sasikala, is guarding her corpse in cemetery from the culprits. He is awaiting for second post mortem for his sister’s corpse as the family was not satisfied with the initial post mortem report. “Despite of several complaints, police are not putting any efforts to find them. Instead they are asking me clues about their whereabouts” Arun Babu said to the media. On the day Sasikala died, Devendran and Purushothaman who didn’t like Sasikala getting married to another man, went to her house and shouted “Thooku Pottu Sethu Podi” and hurted her physically.

This is really shocking. Brother of the victim fighting for justice but Accused in this case absconded. And he is from DMK according to police sources #JusticeForSasikala pic.twitter.com/rYJ7TB46N9

Under the hashtag “Justice For Sasikala”, many people tagging the official twitter account of DMK leader MK Stalin and his son Udhayanithi Stalin and seeking justice.

Singer Chinmayi and a number of influential personalities are creating awareness regarding the case and trying hard to seek justice.

What is #JusticeForSasikala?
A 22 year old girl was reportedly filmed while bathing by 2 men (brothers). That video was used to blackmail and sexually assault her for 4 years. On 24th June, she was found hanging. Her family suspects murder and demands justice. Suspects missing.

Dei ya…? Seri ok…Ofcourse I want #JusticeForSasikala & the perpetrators of this heinous crime should be arrested immediately. The DMk should ofcourse remove them from membership. Also dumbass aren’t you currently part of the ruling party? Make sure justice is done. https://t.co/YzdHN6KoLB

Devendran DMK youth wing secretary & his brother has shot video of Sasikala, women living in Cheyyur-TN, & blackmailed her to provide them with sexual favours

On refusal & warnings of complaint, they killed n hanged her

Previous article“No One From Her Department Called Or Supported” -Revathi’s Husband !!
Next articleVanitha Vijayakumar Demands Apologize From This Producer !!