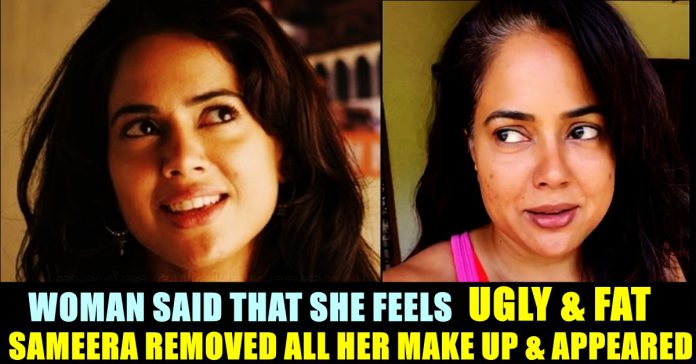 In a world which is filled with negativity, actress Sameera Reddy runs an Instagram account only to spread positivity. She never lets her followers, especially women who just gave birth to their children to feel low. The actress who conducted a gutsy photoshoot during her pregnancy period and broke the norms of a pregnant woman, has now posted video asking her followers to be happy and live the moment instead of whining about their appearances.

In a way of responding to a mom who said that she feels “ugly” after seeing one of Sameera’s post, the actress removed all her makeovers and appeared for a selfie video to give confidence not only to her but to all those 8 lakh followers who are following her. Sameera left her hair unbleached, didn’t apply a single layer of make up and flaunted her belly in the video to convey that it is completely fine to be original.

In the video Sameera says that she received a message from a mother of a one year child who saw one of her story. While narrating what she said through her message, Sameera hesitates to use the word “ugly” and says that the mom doesn’t find herself beautiful. “She really feels “Fat” and she uses the word “Ugly”. Oh My God.. These are the words I fight against and I try my best to be fearless.” said Sameera who said that she wants to show all of her followers exactly how it is and doesn’t wants her followers to compare themselves with her.

The actress further started sharing about her past where she was compared with everyone as she was an actress. “I used to do crazy things like wearing coloured lenses because I need to look fair, Lighten my skin, I padded every part of my body as I didn’t feel keeping up with the norms. But end of the day, it made me feel more crap about myself. That’s why today I fight damn hard to fight against any kind of shaming” said the “Vaaranam Aayiram” actress.

Sameera asked her followers to promise her to stay focused on their goals. To motivate them, the actress said that she could change the angle and make herself look skinny it is completely fine with her to show her double chin and belly fat as she knows that she will get over it and lose her weight in good time.

She asked her followers to focus on being healthy not skinny and requested them to focus on happiness. Check out her post below :

I had a message form a mom who says she feels ‘fat’ ‘ugly’ and ‘not beautiful’ with her post baby fat . She said she looked at me and felt dejected . OMG!!! So here are my morning swelly eyes . No tricks no make up just me owning it! And I’m hoping that this enforces a positive spin on our own expectations of ourselves . I feel coming back to the public view in a way that I feel no pressure for my own mental health has helped me stay focused on being a good mother and a person who is self accepting that makes it a healthier space for all around me . Don’t dwell on what you are not and what you don’t have ! Let’s focus on the good 🙏🏼 we are all #imperfectlyperfect #loveyourself #justthewayyouare #keepingitreal

This post motivated many of her followers including actress Samantha. Many shared this post of the actress and expressed their admiration over the ample of positivity.

Samantha shared the video in her story :

Kiki Vijay, actress Nisha also poured their love along with the many.

Comment your views on this gentle reminder of the Sameera !!