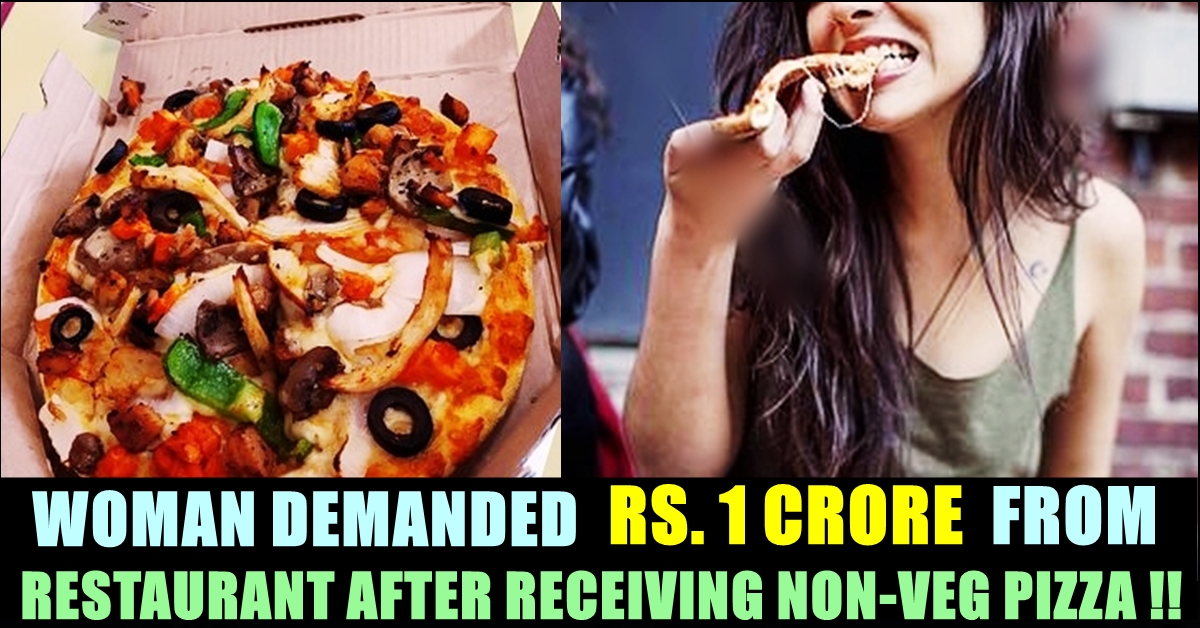 A Woman from Ghaziabad’s Uttar Pradesh demanded Rs. 1 Crore compensation after receiving Pizza which was made of animal meat. She who is a pure vegetarian, has filed a legal complaint with a consumer court alleging that the delivery caused her “mental agony” and demanded the huge sum of money from the restaurant chain. Identified as Deepali Tyagi, the UP resident reportedly said that the action of the restaurant chain has spoiled her religious practices.

In her petition, Deepa Tyagi has said that she is a pure vegetarian due to her “religious beliefs, teachings, family traditions, own conscience and her best choice”. According to her petition, the incident took place on 21st of March, 2019. Deepali ordered a vegetarian Pizza from the outlet near her house as her family members were hungry after celebrating the Holy festivel.

The UP resident said that the restaurant failed to deliver the food within 30 minutes which is their own stipulated time frame for home deliveries but she ignored it generously. After the delivery, when the family took a bite from the Pizza, they realized that it was meat and got shocked on the fact that they have eaten non-veg instead of mushroom which was originally ordered.

Farhat Warsi, Deepali’s lawyer informed the consumer court about the complaint of the woman regarding the “gross” negligence of delivering a non-veg pizza in a house full of pure vegetarians. When an authority of the pizza outlet offered to serve pizzas for the her whole family free of cost, the complainant denied and said that the incident has caused her long standing mental agony. She reportedly said that he has to undergo long and costly rituals throughout her life to compensate the sin of eating meat.

The restaurant authority left the matter to be dealt with the chain’s legal team. After that, Deepali came up with an allegation saying that the restaurant chain had a “very casual approach” towards the matter and said that their offer of serving pizza free of cost is a “mockery and insult to the social and financial” status of her.

Petition of the complainant said “That the opposite party’s negligent manner of performance has contaminated complainant body with food mixed with animal meat that was acquired by killing and cutting short the life given by God to any animal. In her religious belief killing any animal and eating its meat is a “paap” (sin). The opposite party has a deceitfully involved complainant in that sin of eating animal meat. They have wounded her soul giving her mental agony for her whole life. They have ravaged her religious belief,”

In her plea, Deepali has urged the restaurant chain to pay her compensation for mental harassment and financial difficulties that was caused by them. The next hearing of the case is set on March 17 and the pizza outlet is asked to file a reply to the woman’s complaint.