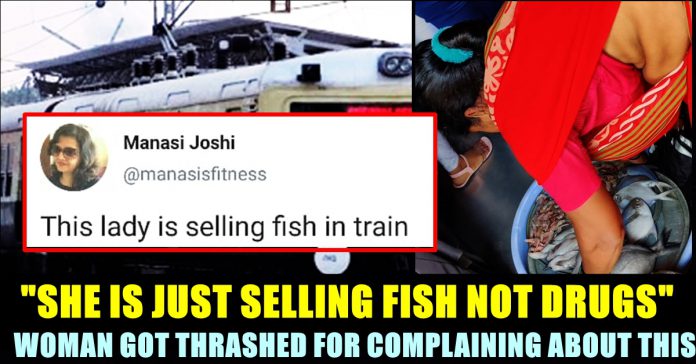 Woman Complained About A Lady Selling Fish In Train By Posting Her Picture !! Got Thrashed !!

India’s rail network is one of the largest and busiest in the world, and Indian Railways is the world’s eighth-largest employer on earth, with roughly 1.3 million workers. There are more than 7000 train stations across the country.

Along with the official government employees, in running train we have seen people earning money through selling fruits, vegetables and even stationary items such as pen pencil. In this rare incident, a twitter using woman complained about a lady selling fish in running train.

She posted a picture of that woman and tagged Mumbai police to complain about the matter. Her post read as “This lady is selling fish in train got in at kurla going to gowandi”

However, the twitter user got thrashed by her fellow netizens for posting an inappropriate picture of the lady selling fish. “Why are you tagging the police? She is selling fish not drugs… She is doing it to earn an honest living for her family. If you have a problem Mansi ji, take a cab to work/home.” wrote one of an user as an reply to this post.

Check out some of the reactions for this post :

look your concern is valid but that picture depicts the lady without dignity. Delete it or crop it.

If you don't want fish then don't buy aunty. Nobody likes a snitch.

Joshi I request you not to travel in train anymore it won't affect the rail budget. Atleast she is not begging or asking money from any of u. Pls jiyo aur jeene do..thank u

Cheap mentality
your one tweet might have messed her life. At least you would have thought about her family. She is not a criminal.
I am very sure if you would have seen any criminal doing any criminal activity, you could not have raised compliant against him specially with photo

So what's a big deal. Lakhs of people travel in local trains to earn their bread and butter.

If someone had posted an absurd partially unacceptable picture of yours without approval, you would have created a hullalloo about it. And here you are breaching someone else's privacy. Also, please stop poking your nose in some folks really working hard to earn their bread

However, Mumbai police responded to the tweet in a way of encouraging her. They forwarded the complaint of Manasi Joshi to Central railways :

Though it seems the complaint of Mansi is valid, the picture she posted without the lady’s consent is not at all acceptable. She might have told her personally not to sell fish on running train and let the lady face the consequences if she doesn’t follow it. What do you think on this complaint made in social media ?? Comment your views below !!

Based on a clip that got resurfaced in internet platforms, users of online platforms has been trolling Bollywood cinema for making a movie called...