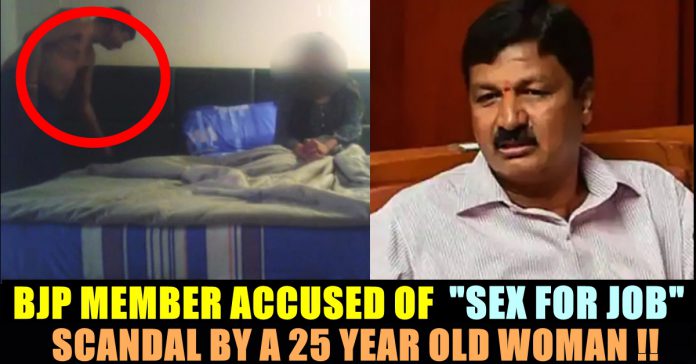 Ramesh Jarkiholi who was serving as a Water Resources Minister in the Government of Karnataka, had to step down from his post earlier this month after Television channels played a video CD which allegedly featured him and a young woman. The issue is grabbing headlines since March 2 as it involved the minister’s sex CD scandal. He resigned from his post on 3rd of March due to the sexual harassment allegations that emerged against him. The controversy continues to grab the attention of the public as the minister claimed that the video recordings that were shown in the media are fake.

It all started when a local television channels in Karnataka began airing the sexually explicit video and audio clips of a relationship between the 60 year old Ramesh jarkiholi and a 25 year old unidentified woman. As soon as the videos went viral in social media platforms and television channels, a social activist approached the Bengaluru police and accused Ramesh of sexually harassing the woman. The complainer said that he was informed by the woman’s family members.

However, the police filed a case against the BJP member only after the woman filed a complaint through her advocates on 26th of March. The Bengaluru police registered a case of rape against Jarkiholi under IPC sections 354 and 376 (c). In the complaint, the woman alleged that Ramesh Jarkiholi forced her to have sex with him in the pre text of getting her a government job. She also mentioned that Ramesh Jarkiholi denied his promise later.

The complaint of her said that Ramesh enticed her into sexually explicit conversations on video calls and later lured her to meet him at his apartment in Bengaluru where he forced her into sexual intercourse. Her statement was recorded on Tuesday. “We have fulfilled our promise to produce the victim in court to provide her statement. The police should now fulfil their duty and arrest the accused who is roaming around freely.” said the woman’s lawyer after she recorded her statement.

The BJP member has alleged that the videos are fake and it is a failed attempt to extort and black mail him using a morphed video CD. He claimed that a “Mahan Nayak”, a political rival of him is behind the “conspiracy”. However, the woman’s family members stated a different story to the media. They alleged that a group is making her daughter to involve in certain things. They are also alleging that the “group” was holding her captive.

Previous articleShivangi Got Emotional While Recollecting The Trolls She Faced In The Past !! Check Pavithra’s Message To Her
Next articleEntire Country Wished Rajinikanth For His Achievement Of Winning Dadasaheb Phalke Award !!

A popular Tik tok star named fun bucket Bhargav got arrested by police under POCSO act for raping a minor girl in Vishakapatnam. The...

Emerging filmmaker Lokesh Kanagaraj reacted to the controversy that emerged against him regarding the story of his blockbuster film "Kaithi". He who decided not...