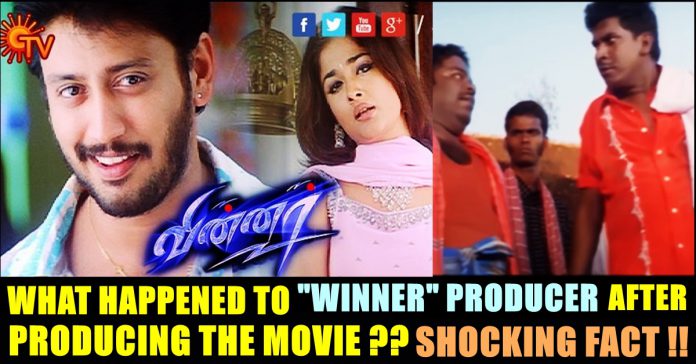 “Winner” directed by Sundar C is a film which could not be forgotten by the users of Tamilnadu based social media as the comedy scenes of that movie is providing meme templates for years. The film which was released in 2003 , grabbed wide attention since the arrival of Facebook which was launched in the year 2004. The film’s comedy clips are famous for the body language and dialogue deliveries of legendary comedian Vadivelu. He won millions of hearts through this character “Kaipulla”.

The movie had actor Prashanth and Kiran Rathore in the lead role. Music composed by Yuvan Shankar Raja, Ramachandran produced the film. Now, popular movie journalists of Valaipechu youtube channel has revealed a shocking fact about the movie. They said that the film’s producer Ramachandran got forced to work as a hotel server after producing this movie.

“Though the film ran successfully in theatres and comedy scenes of it got widely telecasted in Tv channels, producer Ramachandran worked as a hotel server in Tenkasi. A journalist who went there, identified Ramachandran and published an interview of him in Kumutham. Director Bala who read that interview, called him and gave him a role to act in his movie. After that he started acting in many movies. He also worked as a member of executive committee in Producers council. Now his financial state became stable and is leading a healthy life” said Anthanan, of a journalist.

Producer Ramachandran even worried for not having the royalty rights of the film, according to Anthanan. “I will be the richest man if I had the royalty for the comedy scenes of winner” said Ramachandra according to Valaipechu. It is notable that the character name “kaipulla” and the dialogues Vadivelu delivered in Winner, were used many Tamil films as reference. Even a film titled as “Varuthapadatha Valibar Sangam” released and became a huge hit.

Prashanth signed on to star in the film, being produced by R. Bhooma Ramachandran in late 2001. Prashanth was briefly hospitalised after injuring himself filming an action scene for the film. Vadivelu got injured during a comedy scene at the beginning of the movie shoot. However after getting injured in real, Vadivelu managed to continue playing the role as an injured which was later appreciated by the fans.

Despite being completed by the end of 2002, the release of the film was held up after production issues and so the director Sundar C decided to prioritise his work on Kamal Haasan’s Anbe Sivam. Comment your views on this fact !!