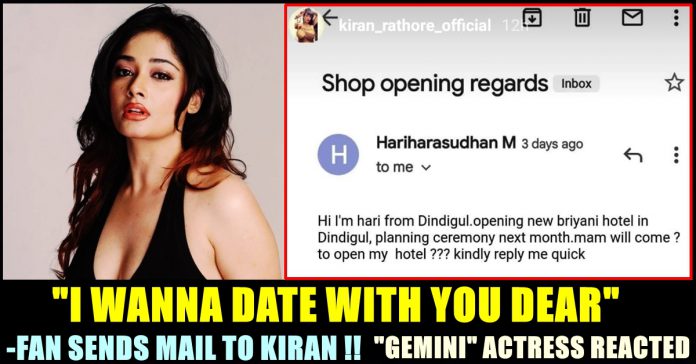 Veteran Tamil actress Kiran Rathod who is pretty much active in social media platforms, trolled men who approached her to open his biriyani shop in Dindigul, to date her and who wanted to get her phone number through mail. On seeing one of those messages, the actress said that she couldn’t control her laughter. Kiran is pretty much active in Instagram with 4 lakh plus followers by uploading the pictures of her.

Kiran debuted to Tamil film industry through Vikram’s 2001 flick Gemini. In the film she appeared as a Tamil speaking north Indian girl and impressed the Tamil audience in big time. After that, she acted in Ajith Kumar’s Villain and in Kamal Haasan’s “Anbe Sivam”. Within a very short span of time, the actress shot to fame by pairing up with Kollywood’s top actors such as Vikram, Kamal and Ajith. She was last seen as a character artist in films such as “Aambala” and “Muthina Kathirikkai” of Sundar C.

On Wednesday, Kiran came up with a series of stories trolling the men who sent her mails approaching her to get various kind of help from her. “Hi I’m Hari from Dindigul. Opening new biriyani hotel in Dindigul, planning ceremony next month. Mam will come ? to open my hotel ??? Kindly reply me quick” read the mail shared by Kiran in her story. Reacting to the mail, “Was going through my mail last night and couldn’t stop laughing” in her story. Read : For The First Time Kiran Opens On The Bikini Song In “Winner”After 17 Years !!

Here’s the screen shot of her first story :

In her next story, we could see a man named Kiran asking Kiran to tell process on how to date her. “I am your very big fan. I am from Chennai. I wanna date with you dear. Please tell me the process” the main read. Trolling the user, Kiran replied saying “Process.. I know only processed cheese”

One more user wanted the actress to tell her phone number and Kiran couldn’t resist herself from admiring his confidence level.

Check out the next two stories she added :

Gayathri Raguramm & Kushboo Trolling Each Other Over Nesamani Trend !! Check Out !!

Taminadu party members of BJP are not all happy with the viral hashtag #Pray_For_Nesamani. Gayathri Raguram and her tweets are the primary example for...