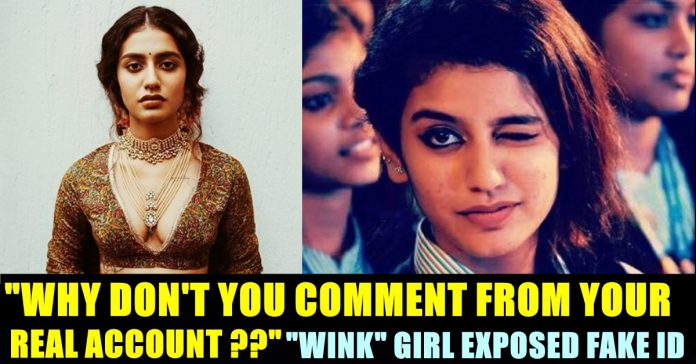 Priya Prakash varrier who became familiar through a short video of herself “winking”, recently uploaded a video in her official Instagram account in which she could be seen falling on the surfaced while performing a scene. The incident took place while shooting for a Telugu film named “Check” which has actors Nithin, Rakul Preeth Singh in the lead roles.

In the video Priya could be seen trying to jump and land on the back of actor Nithin and miserably fails in it. Priya laid on the floor for a moment, gathering the events that unfolded before Nithin and the team helped her get up. The actor laughed off the fall and went ahead for a second try. “Visual representation of life knocking me down every time, I try and take a leap of faith” Priya wrote as her caption.

On seeing this video, an Instagram user, from his/her fake account posted obscene comments on the actress’s recent posts. The user’s comments were bad in taste as he/she blatantly body shamed the actress by writing about the actress’s “thighs”. Capturing the screen shots of the comments, the 21 year old actress, sarcastically wrote “Let’s just take a minute to acknowledge this gentleman/woman” and shared it as her story.

Followed by this, the actress added another story and asked the abuser why he/she couldn’t comment the same from his/her original account. “Why don’t you comment from your real account though ? No b*lls ?” her second story read.

Currently, she is enjoying nearly 70 lakh followers in the photo posting social media account and is busy engaging them by uploading about her movie updates and daily routines. So far she has posted 712 pictures and videos in her Instgram account. Her upcoming film “Check” got released on 26th of February.

Ignore The Rumours, The Production House Itself Announced The Box Office Collection Of 2.0 !! Its Really Huge !!

Rajinikanth and Akshay Kumar starrer 2.0 is on a winning streak at the box office. The film has earned Rs 400 crore nett worldwide, leaving behind Fantastic...