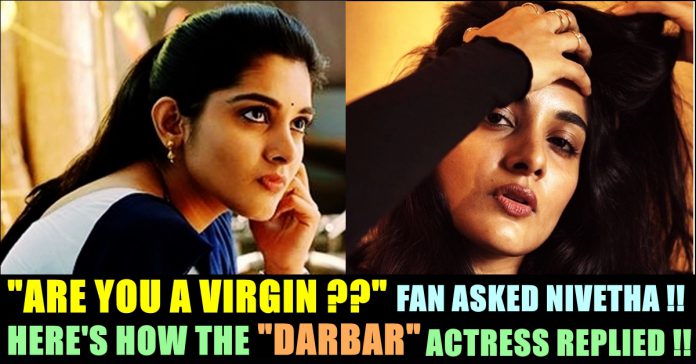 “Will You Marry Me?” Asked Follower To Nivetha Thomas !! Here’s Her Reply !!

One can easily name the actresses who acted along with both Rajinikanth and Kamal Haasan. Apart from Sridevi, Sri priya, Simran and Jyothika, no many actresses shared screen space with both the legends of Indian cinema. New age lead ladies such as Nayanthara and Trisha couldn’t pair up with both of them. But actress Nivetha Thomas who initially rose to fame among the TV audience of Tamilnadu through “My Dear Bhootham” mystery serial, is going to achieve the milestone of acting with both.

The actress who played the daughter of Ulaganayagan Kamal Haasan in “Paapanasam” movie, is going to play the daughter of Superstar Rajinikanth in upcoming “Darbar” directed by A.R Murugadoss. The actress confirmed it herself through a tweet in which she called the Superstar as “Appa”

And now for the world to know!

There is and will only be ONE #AadityaArunachalam

Unlike her other tweets, this one reached widely and was loved by as many as 15k fans. Nivetha Thomas made her debut film with the 2008 Malayalam film Veruthe Oru Bharya, for which she won the Kerala State Film Award for Best Child Artist. In the same year she made her Tamil debut with Kuruvi. She has since starred in more than a dozen movies, making her Telugu debut in 2016 with Gentleman.

Now the actress who is very much active in social media platforms, conducted a chat session in Instagram. Nivetha who enjoys more than 30 lakh followers in Instagram, started receiving many kind of questions from her fans and followers. She shared those questions and her answer to it through stories as well.

Check out some of the screenshots of the Q & A with her fans below :

However, few of her followers seemed to cross the limit and asked her some questions which are not in good taste at all. Few of them even questioned Nivetha whether she is a virgin or not. In a way of answering to them, Nivetha, in one of her story wrote “Guys, I appreciate everyone taking time out of your day to have a chat . . thank you so much ! I had a great time answering some of the fun questions while I avoided questions like ‘Marriage when’, ‘Say one word about..’, ‘Have boyfriends’, ‘Will you marry me’, ‘virgin?’ and a few/more bizarre ones. Please realise that you are talking to a fellow human and have some respect and dignity. Again, I really appreciate the time. thank you guys !! will catch up soon”

Check out the screenshot of this story here :

Nivetha who acted as a sister of actor Vijay in Jilla movie, has handful of projects in various stages of production. She played mail female lead in actor Jai’s Naveena Saraswathi Sabatham and is expected to act as more movies as lead.

What do you think on this reply of Nivetha ?? Comment your views !!

How Many Crores Netflix Paid To Buy “Jagame Thandhiram” ?? CHECK OUT

Makers of "Jagame Thandhiram" officially announced that the film will be released on "Netflix India" directly skipping the theatrical release. Now, reports on the...