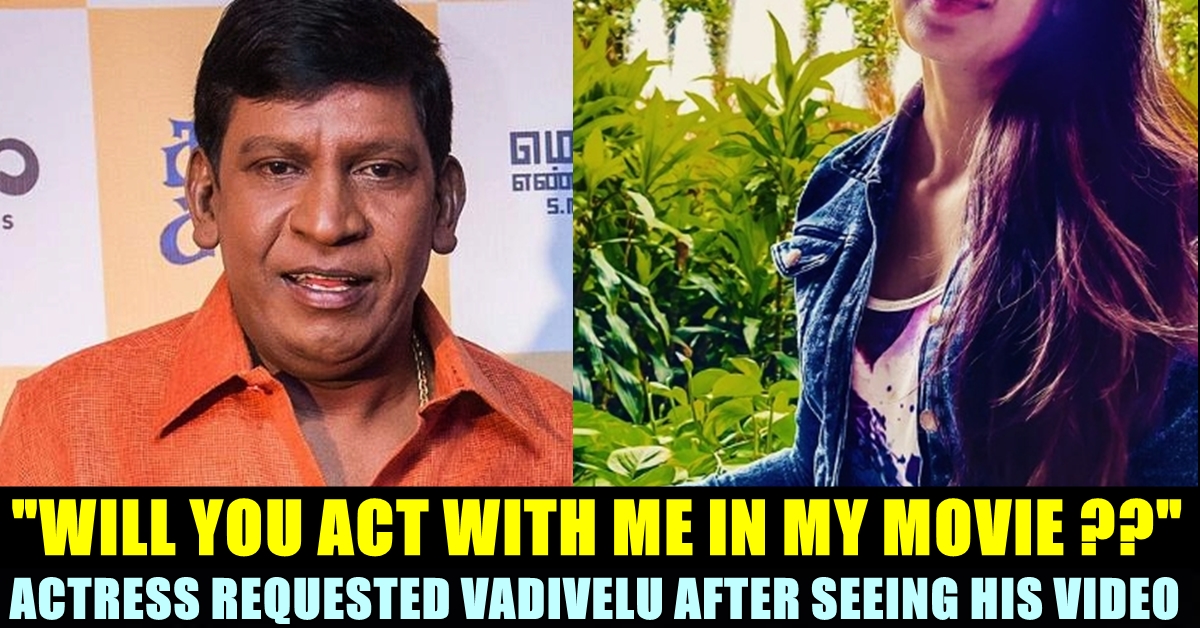 A video of Vagaipuyal Vadivelu singing the most popular “Ullathil Nalla Ullam” from “Karnan” film went viral recently. On seeing the video, controversial Bigg Boss participant Meera Mitun who is known for acting in films such as “8 Thottakkal”, “Thaana Serntha Kootam” came up with a video saying that she wants him to act in a film which is being produced by herself. She said that she doesn’t know how to reach Vadivelu and released the video in her twitter account.

Days ago, a video of Vadivelu singing “Ullathil Nalla Ullam” in a music studio went viral across the social media platforms. The actor who is known for his stint in Tamil film industry, forced to take a break and couldn’t be seen in the films that are being made in Kollywood. An issue that took place during the making of his “Imsai Arasan 24m Pulikesi” created a controversy and caused the break of the skillful actor. Through his recent speech, Vadivelu who got emotional, said that he is in lockdown for past 10 years. “I have energy and desire but no one is ready to give me opportunity” the actor said.

Watch the video of the actor singing below :

Now, on seeing this recent video of him, Meera Mitun, one of the contestants of Bigg Boss season three uploaded a video saying that she wants Vadivelu to act in her upcoming film. “I have been seeing the recent speeches and interviews of Vadivelu sir. I saw you feeling sad while singing “Vanjathil Veezhnthayada”. They would always look for ways to decept a successful person” Meera Mitun said in the video.

“I want to tell something to you. No one can ignore anyone. It is a lesson I learnt from my life. I have seen your film “Thenali Raman” and I am a big fan of it. I have never seen an actor like you in my life. Because many people are acting as “Heroes” without knowing the definition of the term acting” She added.

“All the roles you have essayed in “Thenali Raman” were top notch. I got shocked on seeing your performance in a song, especially. You are a legend and you should not shed tears. I have been doing several projects in my own production. I invite you to act in my film if you have interest to act with me. I will be so honoured to act with you. I don’t know how to contact you and expecting a call from your manager or PR.” she further said.

“If you have interest, please act with me in my film. You are a legend already and you should not weep” she concluded. Adding the video, Meera Mitun wrote “தமிழ் #தமிழோடுவாழ்வோம், For You Sir #actor #Vadivelu” as her caption. “Art is anybody can do nobody can put a stop to anybody by law is a true fact” she said in her next tweet.

Art is anybody can do nobody can put a stop to anybody by law is a true fact #actorvadivelu https://t.co/CVdF4880pG

If you are aware of Bigg Boss show’s third season in Tamil, you must have known about Meera Mithun , one of the most talked about participants of it. One of the highly controversial episode of the season is undoubtedly the one in which Meera Mithun accused Director Cheran of physical harassment.

After accusing Director Cheran of physically assaulting her, Ulaganayagan Kamal haasan of nepotism, Superstar Rajinikanth of promoting himself during COVID 19 pandemic, Trisha and Nayanthara for copying her style, actress and model Meera Mitun, recently attacked Vijay and Suriya through her tweets as well. Her controversial videos and tweets against the top tier actors made ace director Bharathi Raja to release a press note. Even actor Suriya uploaded a tweet asking his fans not to involve themselves in responding to negativities.

How Many Crores Netflix Paid To Buy “Jagame Thandhiram” ?? CHECK OUT
Old Post Of Sivakarthikeyan On Petrol Price Is Trending Now !!
Advertisement