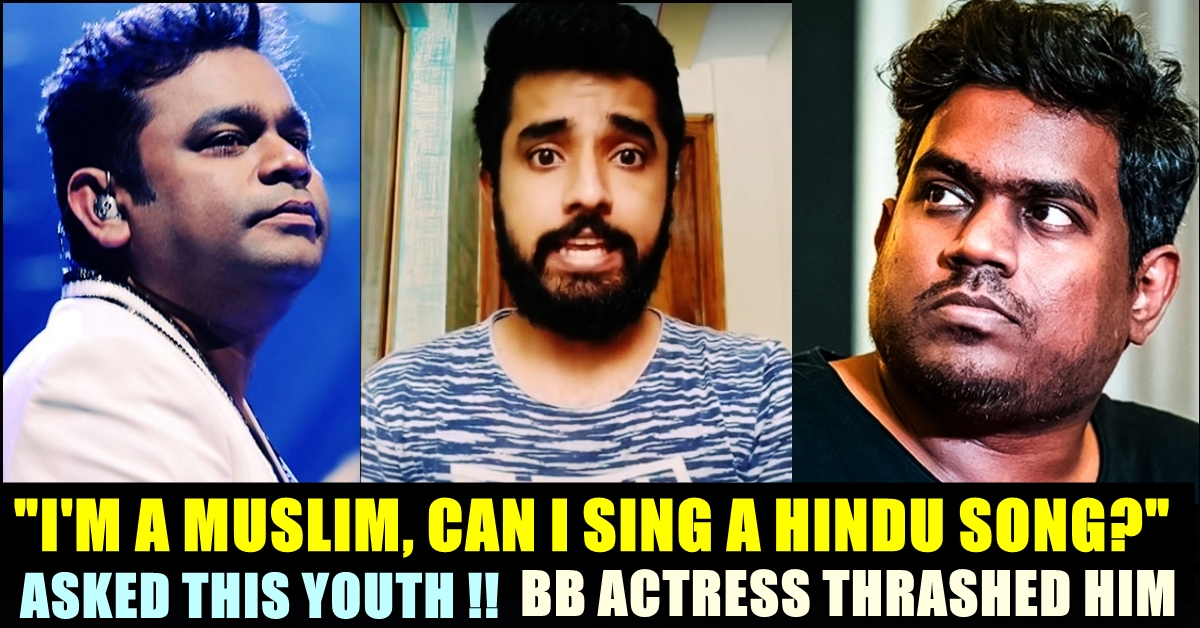 Actress Kasthuri who has been constantly raising voicing against the political and social happenings through her official twitter account, has slammed a social media user named as Ahmed Meeran for one of his tweets. In his tweet, he who belongs to Muslim community, asked whether the society would accept him if he makes a cover video of “OM SHIVOHUM” from “Nan Kadavul” movie.

He identified himself as a Islam practising Indian citizen and said that he wants to make the cover version of the song composed by legendary musician Ilayaraja. “I’m an Islam practising INDIAN Citizen. I want to make a singing cover version of “OM SHIVOHUM-ANDA BRAHMANDA KOTI” song from the Tamil film Naan Kadavul (A song on Lord Shiva). Will the Society Accept me?” he wrote in his tweet by adding an hashtag saying “Secularism”.

I'm an Islam practising INDIAN Citizen. I want to make a singing cover version of "OM SHIVOHUM-ANDA BRAHMANDA KOTI" song from the Tamil film Naan Kadavul (A song on Lord Shiva).
Will the Society Accept me? #Secularism

Many of Ahmed’s fellow twitter users anecdoted the occasions where a converted muslim composer Yuvan Shankar Raja composing Hindu religious songs and a Christian singer Yesudas lending his voice for devotional songs of Hindu religion to let him know that it is not at all wrong. Even Oscar winning A.R Rahman have composed Hindu religious songs, said one of a Twitter user.

Mahabharat lead Character arjuna was portrayed by a Muslim guy only they saw him as arjuna and nobody opposed.. You do bro… pic.twitter.com/R0EoX0CcKp

Any doubts bro?? Legend Yesudas is admired all over India for his Hindu devotional songs. SPB sir sung so many cristmas songs. No other country in the world is more secular than us. Don't worry about fanatics. They are negligible in numbers. Looking forward to your song. 👍👍

Meanwhile, actress Kasthuri posted a reply accusing Ahmed of writing a malicious divisive tweet. She also said that Hindus would accept all faiths and asked Ahmed if the videos he is creating are “islamic”. “will YOUR society accept?” said kasthuri by adding hashtags of “pseudo secular” and “trouble maker”

What a malicious divisive tweet.
INDIANS, Hindus generally accept people of all faiths, we pray with Ayyappa songs by YesuDas & Andal Pasuram by Yuvan. But ask yourself as a 'practising' muslim are ur videos islamic? will YOUR society accept? #pseudosecular #troublemaker https://t.co/dhSTH0YV6r

It is notable that Ahmed Meeran who has been constantly trolling controversial actress Meera Mitun through his videos, made fun of Kasthuri in certain occasions as well.

“I am Facing 40 Lakhs Of Loss Per Month” – Theatre Association Head Slammed Suriya !!
“Thalapathy Will Never Let You Down” – Theatre Owner !!