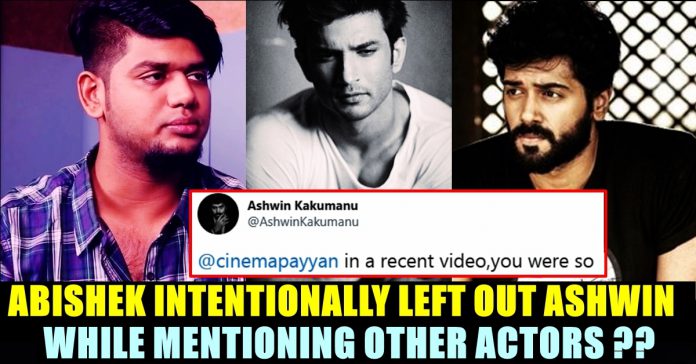 The demise of young talent Sushant Singh Rajput made a revolution in Indian film industry, we must say. High profile stars, producers and filmmakers such as Salman Khan. Alia Bhatt, Karan Johar came under scanner since the death took place. People who loved them all these days started questioning their character in welcoming newcomers and debutants with no film background. Several hashtags against Nepotism in film industry are still trending in the micro blogging social media site due to Sushant Singh Rajput who killed himself on 14 of June due to depression.

Several film stars reacted to the incident in various ways. Actress Kangana ranaut said that the lack of recognition in Bollywood industry for the artist pushed him into depression whereas Sushant’s closest friend Rohini Iyer said that he had a life beyond cinema and he is not a person who kills himself for a trophy which never attracted him. Vivek Oberoi felt Sushant could have reached out to him to seek advice which would have helped him to heal the pain her went through. Prakash raj stated that he himself faced problems regarding nepotism in his career.

Meanwhile Bollywood actor Abhay Deol who is known for his performances in films such as Dev D and Tamil film “Hero” , wrote a post expressing his emotions on how he got ignored by Bollywood after acting in a film named as “Zindagi Na Milegi Dobara” with Hritik Roshan. The film which is film about a three friends and about their 3 weeks road trip, became a huge hit during its release time, both commercially and critically. However, after the release of the film, the award functions nominated Abhay and Farhan in supporting actors category and nominated Hritik Roshan and Katrina in lead categories.

Remembering how he got demoted and forgotten for his performance, Abhay came up with a social media post bashing bollywood award functions. The actor termed them as “family Fare awards” and trolled the entire system of Bollywood through his post.

“Zindagi Na Milegi Dobara”, released in 2011. Need to chant this title to myself everyday nowadays! Also a great watch when anxious or stressed. I would like to mention that almost all the award functions demoted me and Farhan from main leads, and nominated us as “supporting actors”. Hrithik and Katrina were nominated as “actors in a leading role”. So by the industry’s own logic, this was a film about a man and a woman falling in love, with the man supported by his friends for whatever decisions he takes. There are many covert and overt ways in which people in the industry lobby against you. In this case it was shamelessly overt. I of course boycotted the awards but Farhan was ok with it. #familyfareawards Very creative artwork @kalakkii

On seeing this post of Abhay, Tamil actor Ashwin who debuted through Ajith’s “Mankatha” as police officer came up with a series of tweets explaining how such kind of discrimination is taking place on every level. Abhay Deol and Ashwin are going to share screen space together in an upcoming adventurous thriller film named as “Idhu Vedhalam Sollum Kadhai” directed by debutant Rathindran.

Popular movie reviewer Abhishek Raaja who manages a youtube channel named as “Open Pannaa” recently produced a video on “Who is Lokesh Kanagaraj?”. In the video, instead of addressing about Lokesh alone, the film enthusiast talked about many upcoming talents including director Rathindran who directed Ashwin’s “Idhu Vedhalam Sollum Kadhai”. While mentioning the actors who played the lead roles in “Idhu Vedhalam Sollum Kadhai”, Abhishek who utters the names of Abhay Deol, Aishwarya Rajesh and Guru Somasunthram, can be seen missing the name of Ashwin who played as one of the lead.

Ashwin, taking this matter to tweet, expressed his emotions through a series of tweets. Check out them below :

the need to hammer every nail that stands out, and in the end an outsider is celebrated and treated like a god, only when they are successful.’Hard work never fails’ is a cliche that is only celebrated when the result is a ‘public’ success.While speaking to @vasukibhaskar…

And while I’m more numb to every new variation of these efforts to sideline, I think people should maybe make an effort to just treat everyone with some respect instead of like dirt, and then treat them like a god later. Treat people like a human being, like you would like to be.

@cinemapayyan in a recent video,you were so enthusiastic about talents who struggle & are yet to get their due,you mentioned my director of #ithuvedalamsollumkathai as one such and named all the lead actors except me.Was my omission an afterthought? (the edit looks so)

The actor also asked whether Abishek chopped the portion out intentionally. “You may have forgotten innocently or done it intently.There is a jump cut in the video while mentioning the other actors. TBH, when my friend pointed it out to me,he was more upset than I was cause I’m used to this by now.Learning not to place my happiness or pain in others hands” read one of a tweet of Ashwin

Abhishek, in his reply tweet said, that he will the raw footage who make sure if editor chopped that portion off. “If I had forgotten to mention, I am sorry. I am really looking forward to this movie. Wishing you nothing but the best.”

Here is their conversation :

I will check the raw footage bro. If the editor had edited it out, he will pay for his mistake. If I had forgotten to mention, I am sorry. I am really looking forward to this movie 👍

Wishing you nothing but the best.

Watch the video below from 9th minute where a jump cut takes place while Abhishek addressing the lead roles of “Ithu Vedhalam Sollum Kadhai” :

“Sivakarthikeyan Rejected Jigarthanda Because Of This Reason” – Karthik Subbaraj

Director Karthik Subbaraj, in his recent interaction with a YouTube channel, revealed that he approached Sivakarthikeyan to do the role played by Siddharth for...

With The Emergence Of OTT, Producers Raised 6 Demands To Theatre Owners To Release Films !!