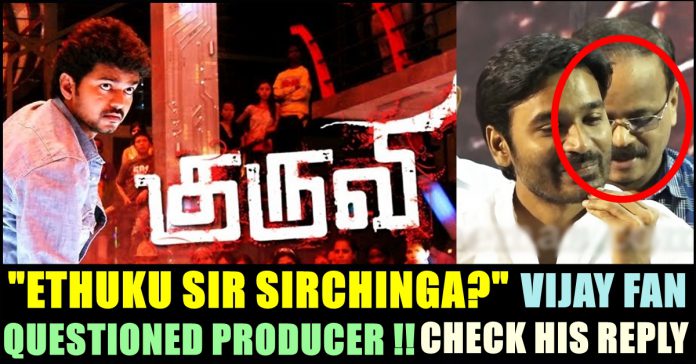 “Why You Laughed?” Fan Questioned Producer For Trolling Kuruvi !!

Actor Pawan’s speech on Asuran success meet created huge outrage among the fans of actor Vijay. The actor in the 100 days success meet of Asuran said that he is not sure if Vijay’s Kuruvi had a theatrical run of 150 days in theatres. This statement from the “Vada chennai” actor irked the fans of actor Vijay who started expressing their frustration over the actor who said it. Few even spreading hatred against Vettri Maaran and Dhanush by alleging that they laughed during Pawan’s speech.

One of a fan went on to question producer Dhananjayan as well. The “Mozhi”, “Chandramouli” producer was seen sitting in the second row during Pawan’s speech. One of a follower asked why Dhananjayan laughed when Pawan was degrading their idol’s movie. He wrote “Sir,seriously I have a huge respect on you.But now I lightly hate u sir.When Pavan in audio launch,said about kuruvi, u are laughing….and the whole team laughing including @dhanushkraja .i am a vj fan.pls clarify about @dhanushkraja smile and also urs.what @dhanushkraja said…” in his tweet.

To his questions Dhananjayan kept telling that he didn’t listen to what Pawan said and he was on his phone during his speech. Check out Dhananjayan’s replies to the Vijay fan below :

Hey who spoke? No idea ?

Hey check the video. I was on my mobile & didn't follow what he said. Don't drag me into this.

Not clear what & who spoke?

Pawan, while appreciating the 100 days run of Asuran, said that Kuruvi’s 150 days celebration was the last time he attended a success meet for a film for its longest run. He further added that he don’t know how far the success of Kuruvi is true which made the people in the hall to laugh.

Followed by this, Dhanush while delivering his speech didn’t miss to address Pawan’s speech. “While conducting this kind of event, there will be few problems like this. We will be having the control of only what we speak. (Laughs) So please react to what is right and leave the rest” the actor said in response to Pawan’s remark.

Check out his speech here :

This is Why We Like Dhanush Compared to Ajith Suriya ! ❤#Master pic.twitter.com/rn2axXXL5V

What do you think on these replies of Producer Dhananjayan ?? Comment your views below !!

On Friday, the AIADMK government has passed a Bill temporarily providing an internal reservation of 10.5 per cent to the community under the category...

Shami Faked His Age & Cheated BCCI !! His Wife Produced Each & Every Evidence In Facebook !!

Indian cricketer Mohammad Shami is presently in England and is a part of the Indian squad that is playing the first test match against...