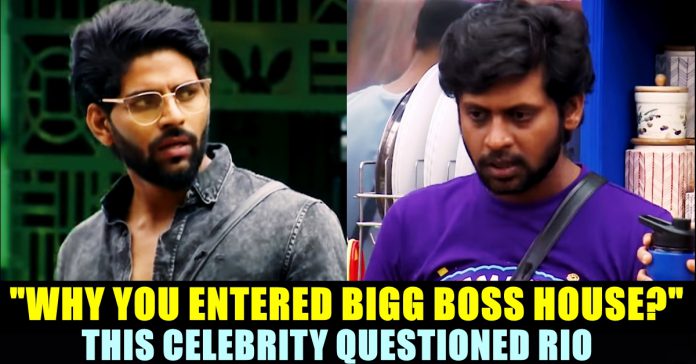 Rio who mistook the words uttered by Balaji, got emotionally occupied and kicked the door which grabbed the attention of his housemates. However, Balaji made himself clear by saying that didn’t say what Rio heard. On seeing Rio’s behaviour, dance choreographer Sathish who also appeared in a number of films, questioned why he entered the Bigg Boss house. He who has been tweeting about the show since its start, is keenly following the ongoing reality game show.

It all started when Aari nominated Balaji by reasoning that his love with Shivani is ruining his game. While announcing about the nominated contestants, Bigg Boss revealed the words used by the housemates anonymously. On hearing what Aari said through Bigg Boss, Balaji made a statement saying that he is not loving anyone in the house and warned that he will question back them if they repeat the same accusation again.

Rio who couldn’t tolerate the behaviour of Aari, kicked a door to express his anger. He misunderstood Balaji’s statement and believed that he warned the housemates to physically hurt them. While talking about it to Aajedh, the house’s captain of this week, Rio said that his family would feel bad if they see this happening to him.

However, later they both sat down and sorted it out. Rio gave handshake to Balaji and asked “Sorry” for causing the misunderstanding. Sathish who was watching the show, posted a tweet asking why Rio participated in Bigg Boss show if he is very much concerned about his family. “Family pakaranga avanga feel pannuvanga na why going to BB? Puriyale. This season is boring max. Shivani,Archana,suchi, rio,Sam Nisha,aje,.Some good 7 contestant lost there chance for this bb season 4.” his tweet read.

Check out his other tweets below :

People who sat near bala dint hear Wat he said rio heard it so clearly . During telecast I was not able to hear. family will hear he is very concern about it? Wat route is this? Unwanted anger https://t.co/4te6AC2Sc7 everyone have to behave cos family pakaranga.Enna pa idhu

Basic respect Anitha asked jus five mins rio could have said sorry I don wanna speak to u on face agreed but comming back and sitting with the gang and mokking about it seriously RIO not cool . To avoid helping in kitchen team is silly and som din speak up for a friend.

Sathish Krishnan is a dance choreographer and supporting actor in Kollywood film industry. He rose to fame through reality dance show “Maanada Mayilada”, title of which he won along with TV actress Jayashree. He choreographed actor Ajith kumar in “Ennai Arinthaal” and acted as Simbu’s friend in “Achcham Enbathu Madamayada”.