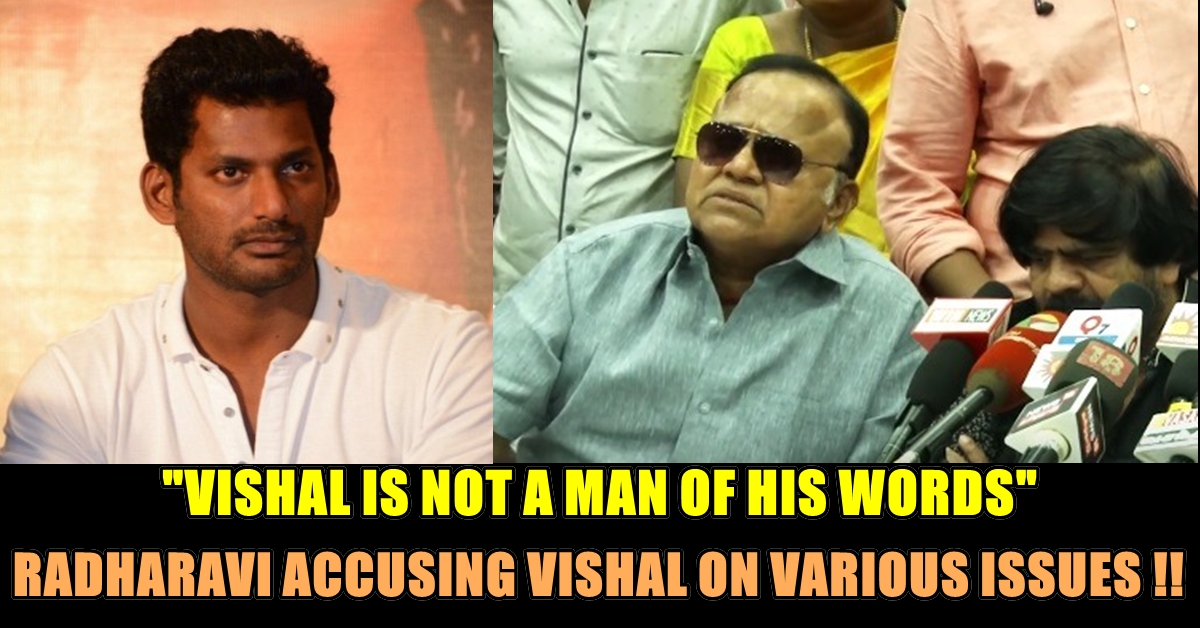 A group of around 40 producers including Bharathiraaja, T Rajendharr and Radha Ravi, held a consultative meeting to demand the ouster of Tamil Film Producers Council (TFPC) president Vishal. Speaking to reporters after the meeting, actor Radha Ravi claimed that Vishal has failed to deliver on his election promises.
Speaking at the press conference Radha Ravi questioned, “When Vishal had announced that big movies will release only 200+ theatres, how come his film alone can release in 300+ theatres?” The press conference was done after a whistle-blower website Savukku Online came up with a shocking claims stating that Vishal hired an agency to find out the whereabouts of the piracy websites that include Tamil Rockers. The report that he received allegedly claimed that all the domains were booked by ‘lycamovie.com,’ the website of Lyca Productions, which is funding movies like Rajinikanth’s 2.0 and Kamal Haasan’s Sabaash Naidu. He also accused that Vishal, the president of Tamil Film Producers Council is being controlled by a single producer. “Vishal promised to curb video piracy and claims to have nabbed the pirates. But he is hesitant to expose them,” he added.
Taking a dig at Vishal, he said Vishal might have decided to release his film early to hope the film runs better. Radha Ravi concluded by asking for the current president Vishal to step down and batted for a Tamil producer to take over as the president of TFPC.
[wp_ad_camp_1] Radha Ravi, who served as an office-bearer of South Indian Artistes’ Association (Nadigar Sangam) for nearly three decades, lost his secretary post to Vishal in the poll held in 2015. Vishal holds office in both TFPC and Nadigar Sangam. With Nadigar Sangam elections are due this October, Radha Ravi has begun his attacks on Vishal.
Watch Video Here :
Video Source : Indiaglitz
Continue Reading
Advertisement
Related Topics:

Watch : Rishab Pant Grabs The Attention Of His National Captian !! : Kohli Stares !! Must Watch . .
“Get Out Of The Country !!” : Students To Be Thrown Out If They Caught Staying In US After Completing Their Studies !!