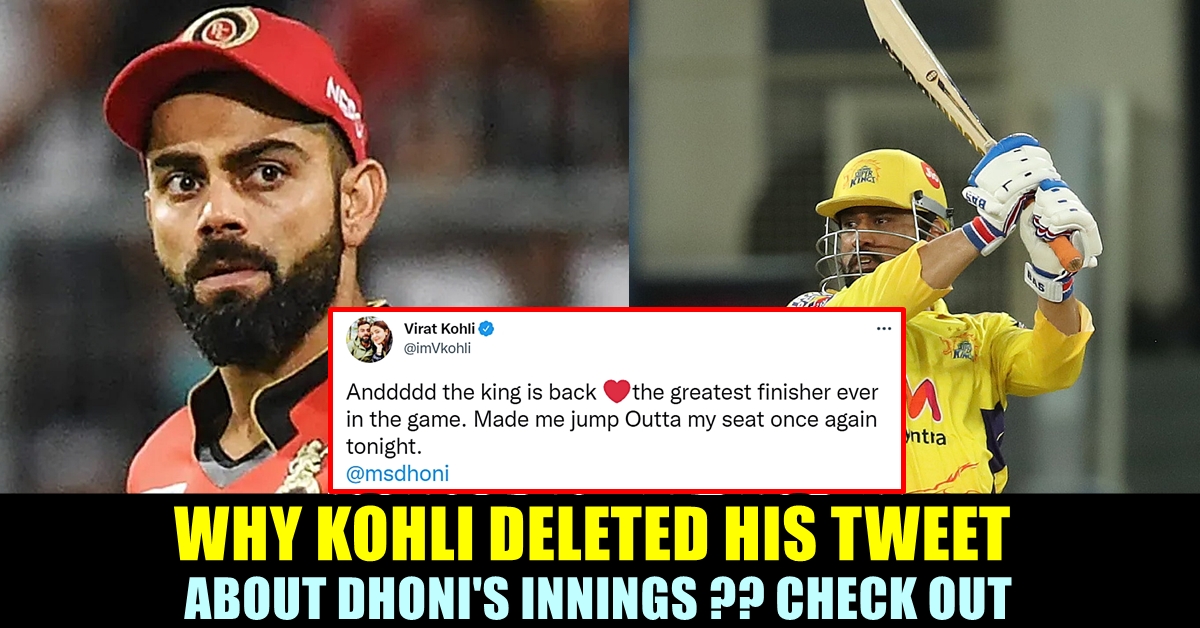 Team Chennai Super Kings qualified for the finals by beating Delhi Capitals for the first time in the 14th edition of IPL tournament. Chasing 172 runs, CSK opener Ruturaj Gaikwad and one down batter Robin Uthappa displayed a special show. Captain MS Dhoni who came in to the crease during the 19th over, smashed 3 boundaries and one six to finish the match in style. Entire Internet, including current Indian captain Virat Kohli came up with reactions praising Dhoni for the way he finished the match with two balls spare. Kohli, whose tweet about Dhoni’s innings is going viral in social media platforms, indeed deleted his first tweet about the same and fans found the reason behind it.

“It’s the full team effort. It was tough when we didn’t qualify last time. Emotions were quite high. Forget what has happened till now, we wanted to make the most of the 3-4 games left towards the end. A lot of our batters made the most of that period which is why I feel we have come back strongly this year. Credit goes to the support staff and everyone in the team. Without their character you can’t really comeback like this.” Dhoni said in the post match presentation.

With the win, Chennai Super Kings became the first team to qualify for the finals 9 times in the history of IPL. Fans, celebrities, former cricket players, other sports personalities, politicians, cricket experts and many others from various departments celebrated Dhoni for the way he finished the game.

Current Indian captain Virat Kohli came up with a tweet in his official Twitter handle, writing “Anddddd the king is back ❤️the greatest finisher ever in the game. Made me jump Outta my seat once again tonight” by tagging the offical Twitter account of Dhoni.

Anddddd the king is back ❤️the greatest finisher ever in the game. Made me jump Outta my seat once again tonight.@msdhoni

The tweet became Kohli’s one of the highest reached posts ever and is making headlines. So far the tweet garnered 372k likes and 75k shares with thousands of reactions. However, a number of fans wondered why Kohli deleted his previous tweet, context of which is almost same.

Kohli, after the Dhoni finished the match for CSK, wrote a tweet saying “Anddddd the king is back ❤️the greatest finisher in the game. Made me jump Outta my seat once again tonight” in his tweet. After figuring out the he left “ever” in his tweet, Kohli deleted it immediately and reuploaded his tweet by adding “ever”

Fans who saw the difference between both the tweets, came up with reactions saying that Kohli is the biggest fanboy of Dhoni as he deleted his tweet to mention as the biggest finisher ever in the game. “virat kohli deleted a tweet praising ms dhoni only because he forgot to add “ever” trying to be LOUD AND CLEAR IN WHAT HE BELIEVES ABOUT MS DHONI. love you kohli saab. ❤🙏” a fan said through his comment with many others tweeting similar posts.

The Greatest finisher ever @MSDhoni 😎 pic.twitter.com/o0XyoqXbnN

Virat Kohli deleted his previous tweet just because of he did not add "Ever" (MS Dhoni Greatest Finisher Ever in the game). – Shows The Purest Bond In Cricket, The mutual Respect. pic.twitter.com/Z2ZRmi52wP

virat kohli deleted a tweet praising ms dhoni only because he forgot to add "ever" trying to be LOUD AND CLEAR IN WHAT HE BELIEVES ABOUT MS DHONI. love you kohli saab. ❤🙏 pic.twitter.com/AVk4CoFNLS

Show me bigger fan of MSD than
Virat

Mahirat- The Best Bond Ever in history of cricket pic.twitter.com/MhffuYscoy

It is really heartwarming to see Captain Kohli who is also in the race for the IPL trophy, expressing his admiration over Dhoni, under whom he played cricket for several years. It is notable that Dhoni has been appointed as a mentor for the upcoming ICC T20 World Cup tournament with the consent of Virat Kohli who is going to captain the side for one last time in the format. Fans are excited to witness the combo of Dhoni and Kohli in a different dimension.

Makers Of “Doctor” Landed In Trouble For Allegedly Defaming Women In Their Film !!
List Of Celebrities Who Celebrated Dhoni’s Innings As Their Personal Achievement !!
Advertisement