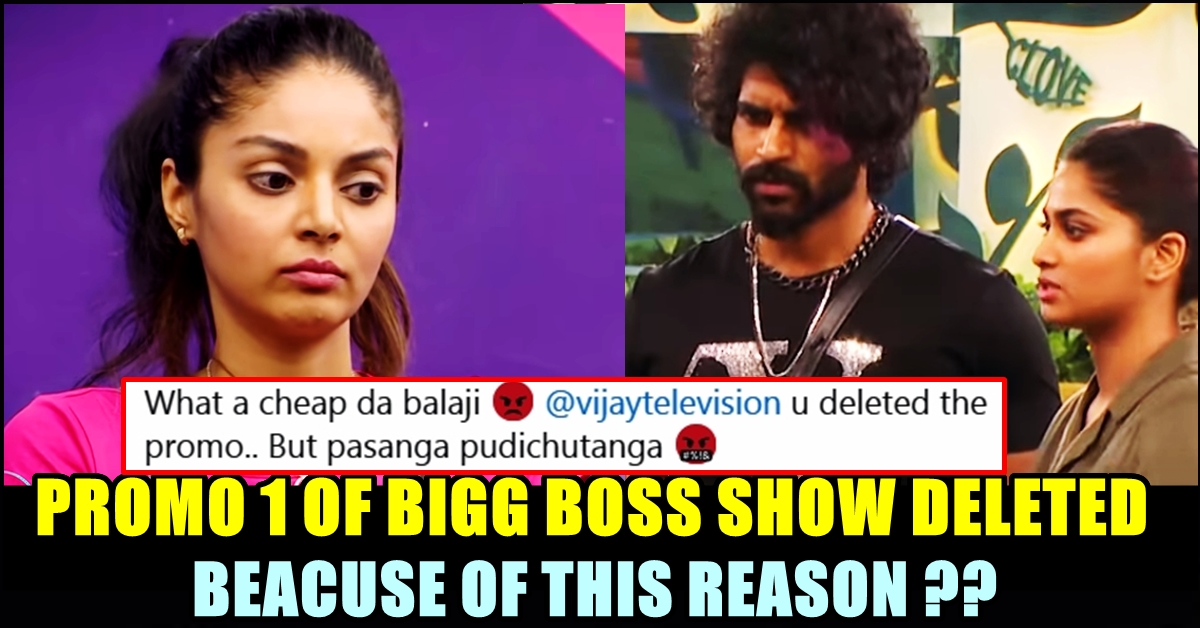 As soon as Vijay TV deleted their first promo of Bigg Boss show’s Tuesday episode in their social media handles, users of social media platforms came up with speculations assuming that they could have deleted it due to a frame that contained Sanam’s complaint letter against Balaji Murugadoss.

Promo 2 showed Suresh Chakravarthy and Sanam shetty having a case against each other. Shivani, Samyuktha, Rio and Archana appeared in the court as the supporters of Suresh whereas Aari, Balaji, Anitha and Ramya made their presence as Sanam’s supporters. In the promo Suresh could be seen accusing Sanam for interrupting conversations to which Balaji replies by saying that his accusation limits the liberty of talking in the house.

When Archana says that she feels stupid of supporting Bala earlier, he could be seen replying that braveness is making the weakest win. The 3rd promo shows Suchithra serving justice in favour of Sanam shetty and Bala celebrating it.

Check out the two promos below :

Meanwhile, the first promo that got released in the channel was deleted immediately. On seeing all the social media handles of Vijay television removing the promo, netizens came up with a speculation assuming that a particular frame of a letter written by Sanam to make a complaint against Bala in the court made them to delete the promo.

This screenshot is going viral among the netizens with various kind of reactions. Check out some of them below :

#BiggBossTamil4 controversial letter from sanam to balaji.. What a cheap da balaji 😡 @vijaytelevision u deleted the promo.. But pasanga pudichutanga 🤬

Why this promo is deleted @vijaytelevision @ikamalhaasan ? If he had said why that wasn't telecasted before 🤔…. Will this be shown in today's episode atleast…. #biggboss4tamil #biggbosstamil4 #sanamshetty #balaji #BalajiMurugaDoss pic.twitter.com/wHqrmR2PGR

so Bala said she won the beauty pageant by adjusting/compromising with others. If he said so this is the worst thing Bala did ever to #Sanam

Is @vijaytelevision deleted the Promo 1 of today because of this? #BiggBossTamil4 #BiggBoss2020 #BiggBossTamil #Balaji #Sanam pic.twitter.com/xHhVUBoraY

Sanam has written to Balaji mentioning that he used the word 'Adjustment / Compromise' against a beauty pageant which she won.

Since huge allegation against the organizer, promo 1 has been deleted#BiggBossTamil #BiggBossTamil4 pic.twitter.com/XaaRWHvJTj

Comment your views on these reactions from the followers of Bigg Boss show !!

Kamal Haasan Took Indirect Dig At Rajinikanth For Not Entering Politics ??
Youths Forced To Travel 80 Kms To Pick Up The Litter They Threw !!