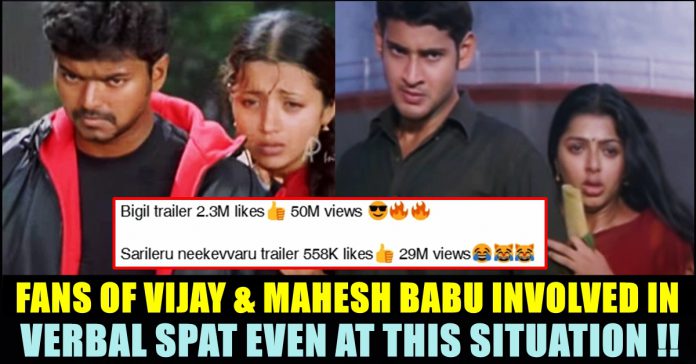 You may ask why fans of the actors are fighting even at this situation of Corona crisis but the fact is they are getting enough time to involve in online verbal spats as they are required to stay home. Fans of actors Vijay and Mahesh babu are fighting with each other in the micro blogging social media site since long back. But for past couple of days, their way of fighting elevated to the next level as they started grabbing the attention of media portals.

Mahesh Babu is one among the most loved actors of South Indian film industry. Being a Superstar in Telugu film industry, his humbleness and his attention towards Tamil cinema made the fans of it to love him more. Meanwhile actor Vijay is enjoying a huge fan base in South India with more than 60 films to his credits. Both the actors are loved by their respective fans for different reasons.

It all started when fans compared Mahesh babu’s “Okkadu” and “Pokiri” with Vijay’s “Gilli” and “Pokkiri” which are the remakes of the former’s films. Fans of the actors started posting stills and videos in a way of proving their favourite star as the best. This fight led to hashtags “Remake Stars Vijay” and “Dummy Star Mahesh” to trend in nationwide.

Check out some of the posts regarding the fight below :

Mahesh Babu Mans : Film Fare Award will be given for those who act well…

Earlier Fans of Telugu film industry and Tamil film industry has started trending hashtags of #TeluguRealHeroes and #UnrivalledTamilActors respectively to prove their industry as best. It all started when the fans of Tamil cinema expressed their disappointment over the first look of Dhanush’s Asuran remake “Narappa” which is going to have Venkatesh in the lead.

Slamming this kind of activity from the fans, Actor Siddharth who worked in both the industries termed them as “Paithiyams” through a tweet. Comment your views !!

Previous article“Mafia Chapter 1” Removed From Amazon For This Reason !!
Next articlePM Modi’s Next Important Announcement !! What It Could Be ??

24 Year Old Sanjana Decided To End Her Life Due To “Work From Home” Pressure !!

The ongoing lockdown crisis forced, not only IT employees but many other computer system based workers to work from home. Using the opportunity, many...