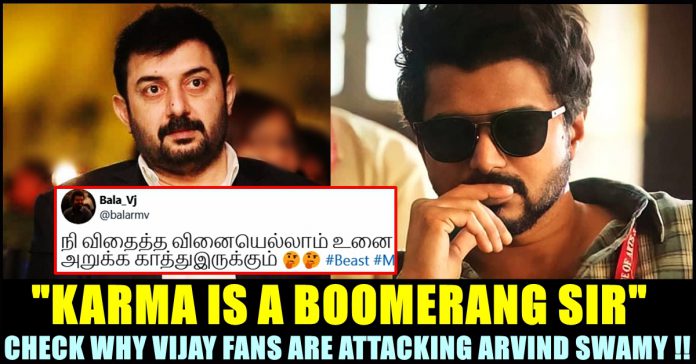 Hundreds of tweets are flooding in Twitter attacking seasoned actor Aravind Swamy for a tweet he uploaded during the release of Vijay’s “Master”. The actor who encouraged government’s decision of allowing theatres to have 50% occupancy during the release of the Vijay starrer, has announced about the release of his upcoming film “Thalaivi” on Thursday. A picture of himself watching the movie with Kangana Ranaut is also being circulated in social media platforms. Fans of actor Vijay who got offended through these activities of Aravind Swamy, started spewing hatred at the “Thalaivi” actor in the micro blogging social media site.

“Thalaivi”, biographical picture of former chief minister Late J. Jayalalithaa is going to hit the screens from Friday. With Bollywood actress Kangana Ranaut playing the titular role, Aravind Swami is reprising the role of legendary actor and former chief minister MGR. As a part of the film’s promotional activity, he uploaded one of the posters of the film, in his official twitter handle.

A picture of himself watching the film in a theatre, sitting next to Kangana Ranaut also doing rounds in social media platforms.

During January, welcoming the Government’s decision of allowing theatres to have 50% occupancy, the “Thalapathy” actor wrote “There are times when 50% is way better than a 100%. This is one of them.”. The tweet went viral with Vijay fans expressing their dejection over it as “Master” was about to release in theatres at that time. Fans of the actor wanted to celebrate the film’s first day first show with 100% occupancy in theatres.

Now, a large number of Vijay fans are quoting this tweet of Arvind Swamy and slamming him by alleging that his actions and statements are contradict to each other. “Planning to watch #Thalaiviii in theaters but after seeing this tweet skipped my plan. Waiting for OTT. This is one of them.” a fan of actor Vijay said in his tweet.

Planning to watch #Thalaiviii in theaters but after seeing this tweet skipped my plan.

Waiting for OTT . This is one of them. https://t.co/yWvABST2Ul

Karma Is a Boomerang Bro 😂🤭 https://t.co/ZscIhNg6Vz

Yes sir,
Definitely , There are Times When 50% is way better than a 100%. This is one of them sir#Master#Beast ✴️ @actorvijay https://t.co/dprsZJLUZB pic.twitter.com/WtlV7ravHf

This tweet made by him during #Master Release now his team itself begging Maharashtra government to open theatres for thier movie #Thalaivii .

There are times when., Even the backside Guard follows the rules and the people who preaches doesn’t practice it! This is one of them. #Master #Beast https://t.co/8ZOXqaNHEz pic.twitter.com/ah6NdFnBr8

Comment your views on these reactions surfaced against Arvind Swami !!

Previous articleRaina’s Tweet About Dhoni’s Inclusion In Team India Made Fans Emotional !!
Next articleGambhir Trending In Internet After Dhoni’s Appointment!!

Team Royal Challengers Bangalore, prior their match against Kolkata Knight Riders, announced that the title sponsors of their team will be donating a sum...