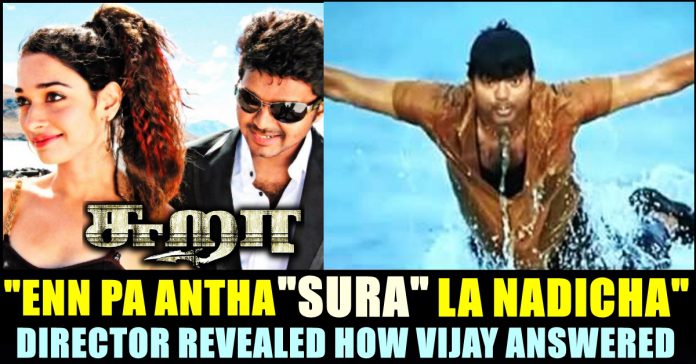 “Sura” is a film to forget for actor Vijay and his fans. The 50th film of “Ilayathalapathy” became a box office dud despite of being a film under Sun Pictures distribution. The film which released with highest expectation failed to impress the critics and fans in big time. After years since its release, the movie, in fact became a major tool for those who tries to troll the actor. Now after 10 long years, director, producer and actor Mano Bala, in an interaction with ace filmmaker Chithra lakshmanan, has shared about his conversation with Vijay about choosing the film “Sura”.

Actor Vijay is one of the very few actors who has huge fan following in South India. Having acted in more than 60+ films, he is in the top race to become the highest paid actor in Kollywood. His most recent film is Atlee’s BIGIL and it is announced that he going to be featured in Lokesh Kanagaraj’s film which is tentatively titled as “Master”. The actor, after “Sura” got flopped, has said to Mano Bala that he got impressed with a dialogue in the film.

The film Sura’s story revolves around a fisherman who fights against a cruel minister in order to save the lands which is used to build homes for his fishermen hamlet. The rest of the film is about how Sura manages to build lands for his hamlet and destroy the plans of minister. The film, which commenced production on November 2009 in Kerala, was released worldwide on 30 April 2010.

In an interview with Touring Talkies , Mano Bala who is now busy in acting with many top heroes, has revealed that he asked to Vijay about why he chose “Sura”. “I once asked to Vijay about why he chose to act in “Sura”. He said to me that the makers of it, narrated him a build up dialogue for the protagonist role “Sura” and said that dialogue made him to do the movie. Then I told him to concentrate on stories instead of dialogues” he said.

Mano bala has appeared in nearly 900 films. He has directed 40 films, 19 television serials and 9 tele-films during his career as a director. He happens to be the producer who identified a talent like director H.Vinoth Kumar by producing his debut film “Sathuranga Vettai”.

This particular clip of Mano bala talking about Sura is going viral in the micro blogging social media. Fans of actor Ajith are sharing the particular video clip with captions trolling the idol’s rival. Check out them below :

Comment your views on the experience shared by Mano bala !!

Previous articleFollower Expressed His Hatred Towards “Eruma Saani” Harija !! Here’s How She Replied
Next articleFor Creating Awareness About CoronaVirus, Oviya Got Trolled !! Check Her Reply

Check What Reasons “Blue Satta” Stating To Say Both PETTA & VISWASAM Is Not Upto The Mark !!

Two of the biggest stars of Indian cinema who command massive fan following have released their movies on January 10. Rajinikanth's Petta is facing...